P.P. Arnold and the Small Faces 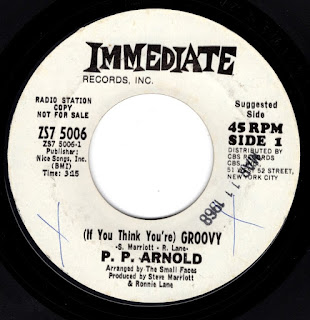 Watts, California born singer P. P. Arnold (born Patricia Cole) found herself in London after quitting being an Ikette in Ike & Tina Turner's band and in 1966 was signed to Andrew Loog Oldham's Immediate records label through intercession of Mick Jagger. She cut six singles for the label in the U.K. Her fourth was penned by Small Face's Steve Marriott and Ronnie Lane, "(If You Think You're) Groovy", issued in Britain in January of 1968 it reached #41 in the charts. It was issued the following month here in the U.S. (where it was her second 45, the first being her cover of Cat Steven's "The First Cut Is The Deepest").

"(If You Think You're) Groovy" is, in my estimation, her strongest track. Legend has it that the Small Faces recorded their own version, but as this has failed to materialize in subsequent comps I believe this is a myth of sorts. In conversation with the late Ian McLagan many years ago he confessed to me that he wasn't entirely sure that there was a version they did of their own! Regardless of the existence of a Small Face's version the band definitely provide the musical backing on this and the results are nothing short of powerful! Driven by Kenny Jone's explosive signature drum fills and Steve Marriott's wailing backing vocals, "(If You Think You're) Groovy" is the perfect vehicle for P.P. Arnold's fiery voice. She's coolly detached and perfect for the song, which lyrically is the ultimate put down song. There's flute, brass and of course the amazing Small Faces. Immediate did a groovy promo film for the track with P.P. and the SF's cavorting on the beach that you can check out here. 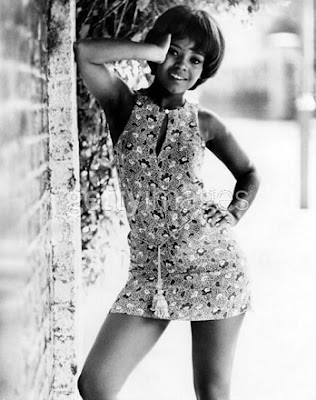 The flip, "Though It Hurts Me Badly" was penned by P.P. and produced by Mick Jagger. It's nothing spectacular, coming off to my ears like a Dionne Warwick tune with soul. Mick did an amazing production job which makes me wonder why the Stones sounded muddy!?!

Both tracks are available on a host of P.P. Arnold compilations, which like the Small Faces material for the label are many!

Hear "Though It Hurts Me Badly":