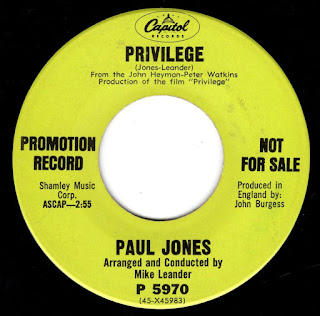 PAUL JONES-Privilege/Free Me U.S. Capitol 5970 1967
Former Manfred Mann lead singer Paul Jones broke ranks and went solo in the Summer of '66. His solo career was quite successful in the U.K. but he had zero impact here in the States. His July 1967 single "Privilege" was the title track of a film that he starred in about a pop singer manipulated by the government (alongside Jean Shrimpton). It was Jone's fourth U.S. solo single (it was his third in the U.K. being issued a month prior as HMV PSRS 309 but with a different B-side).
Penned by Jones and arranger Mike Leander "Privilege" is a powerful number. It's heavily orchestrated and Jone's ability to be a crooner when needed aids him in the track. The track is somber but has a bite when needed (especially during the catchy chorus "it's an honor to be me, an honor to see me, an honor to have that privilege").
"Free Me" is an equally powerful number (it was used in Guy Ritchie's most recent flick "The Gentlemen"). It was also featured in the film "Privilege" and despite not appearing on a 7" in the U.K. it graced the flip of "Privilege" in at least five other countries. Beginning with almost Gregorian chant style backing vocals it descends into a ballad that increases it's tempos and backing instrumentation with each line (guitar, bass, drums and eventually strings and some churchy organ). Powerful stuff!!
Both sides are available on the Paul Jones CD collection "My Way: Albums, Singles, E.P.'s, Rarities".
Hear "Privilege":
https://youtu.be/8frYC8Y1jE4
Hear "Free Me":
https://youtu.be/kfks4mkTOqg
By William - March 04, 2021