Upon joining The Herd, Peter Frampton recorded five singles with them during his short tenure with the band. His debut single with them, "I Can Fly",  was issued in the U.K. in April 1967 as Fontana TF 819. It was released in the U.S. three months later but substituted a tune called "Understand Me" in place of "Diary Of A Narcissist" (which was also the flip side in Ireland, Germany and the Netherlands). The single surprisingly flopped in the U.K., as it did in the U.S., fortunately for them their next three singles all made the U.K. Top 20.
"I Can Fly", like many of the band's singles tracks was written by Howard Blaikley. It's a quirky little number that starts off with a jarring burst of a feed back drenched power chord and a chorus of angelic vocals. With a catchy chorus it sticks in one's brain quite easily. Frampton's vocals sound plaintive and the band's harmonies and the addition of flute in addition to their usual guitar/bass/keyboards/drums formula adds something interesting to the tune. It all reaches a crescendo with the mantra like chorus of  "I can fly" repeated over and over like a mantra as Frampton bashes away distorted power chords until the song fades out with spooky ivory tinkling and restrained guitar feedback. Brilliant! 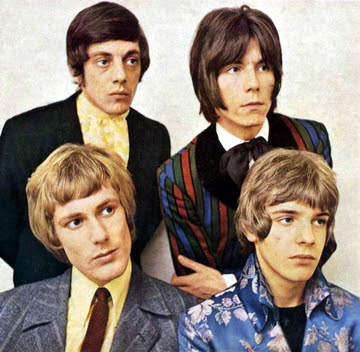 "Understand Me" is a unique track as it was not issued anywhere else in the world on a 45 outside of the U.S. (it also appeared on the band's U.S. LP "Lookin' Thru You" (Fontana SRF-67579 1968). What strikes me as odd is to my ears it's one of the best tracks they ever did. Powered by some rumbling bass, Hammond/piano and a punchy chorus it has a soulful feel to it and deserves repeated playing and would have clearly made a suitable A-side! The high demand for this 45 is no doubt a validation of that!
The U.S. outlet of Fontana issued four of the next five U.K. Herd singles, but without an ounce of chart success
Both sides are available on the comprehensive Herd CD collection put out by Repertoire "Complete Herd" as well as their 1968 U.S. LP "Lookin' Thru You".
Hear "I Can Fly":
https://youtu.be/REzXs_uXtao
Hear "Understand Me":
https://youtu.be/V0fjckbRKRU
By William - June 24, 2021