Kippington Lodge are best known in the annals of rock n' roll history as the musical starting place of British musician's Brinsley Schwarz, Bob Andrews and  Nick Lowe! The band released five singles in the U.K. on Parlophone through their brief career 1967-1969. Today's specimen was their second U.K. single (Parlophone R 5677 March 1968) and their sole U.S. release, being issued here in July of '68 and the first to feature Nick Lowe (tthough not technically, more on that later). Discovered by British based German producer Mark Wirtz (best known for his work with Tomorrow) the band released a host of orchestrated pop-psych ditties but despite Wirtz's magic touch they were destined to remain in obscurity for their existence.
Sadly the band did not play on either side of this release as Wirtz utilized session musicians (among them were bassist Herbie Flowers, guitarist Big Jim Sullivan and vocalists The Ivy League)  with Brinsley Schwarz singing lead on both sides. "Rumors" was penned by Wirtz using a pseudonym but the flip, "And She Cried" (the band's original choice for the A-side) was penned by Brinsley Schwarz.
"Rumors", is a cheeky/cheery pop song led by Schwarz's pop friendly vocals that sounds not unlike the band's previous single, a cover of Tomorrow's "Shy Boy" with harmonies, poppy/regal trumpet tooting away and a bouncy feel to it at! 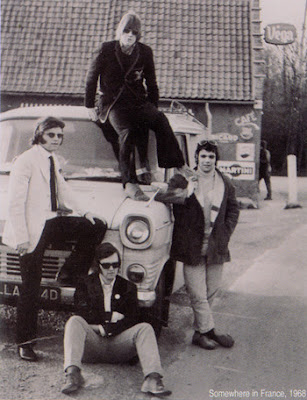 "And She Cried" should have been the A-side. With lushly orchestrated strings, vibes and again some regal brass it's a perfect three minute pop-psych masterpiece. Like the A-side it benefits from Wirtz's stellar production (Tomorrow's lead singer Keith West once described him as "the German Tony Hatch") and despite the fact that it's just Schwarz and session musicians it's nothing short of a masterpiece.
With Schwarz, Andrews and Lowe gaining fame as Brinsley Schwarz EMI put out a 7" E.P. in November 1978 containing both the band's debut singles (alongside similar EP's containing early material by David Bowie, The Paramounts and Simon Dupree and the Big Sound).  In 2011 RPM put out a CD collection "Kippington Lodge-Shy Boy: The Complete Recordings 1967-1969" which contains all five singles, unreleased tracks and BBC session material.
Hear "Rumors":
https://youtu.be/Vb7zmFw0izY
Hear "And She Cried":
https://youtu.be/wPc6-UrVlak
By William - June 03, 2021