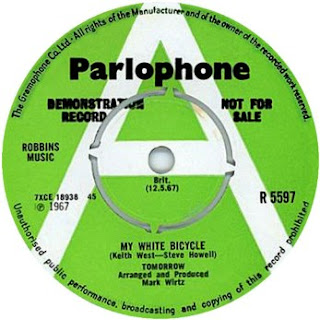 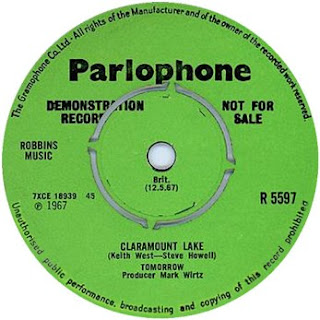 TOMORROW-My White Bicycle/Claremount Lake U.K. Parlophone R 5597 1967
Tomorrow were one of the great unsung purveyor's of English 60's psychedelia. Formed originally as the mod/freakbeat/aggro auteur's The In Crowd in 1965, by 1967 the times had changed and four lads (Keith West-vocals, Steve Howe-Guitar, John "Junior" Wood-bass and Twink (real name John Alder)-drums) rode the wave from mod/r&b to full psychedelic freakout by becoming Tomorrow. The band released two singles and one LP, but were denied the chance to grasp the brass ring when lead singer Keith West scored a simultaneous solo hit about an old dead grocer which effectively turned Tomorrow into a sideline gig and the band imploded.  EMI's decision to delay their LP didn't help matters either. Keith West moved onto his solo career , Twink joined The Pretty Things and Steve Howe formed a few bands before joining ex-Syn bassist Chris Squire in Yes and Junior left the music business to become a croupier.
Their debut 45 was launched in May 1967 produced by Mark Wirtz, whom Keith West referred to as "the German Tony Hatch".  Tomorrow had spent a fair amount of time gigging around the London underground scene with the likes of The Pink Floyd, The Soft Machine, The Deviants et al at the Roundhouse, the U.F.O. and other freak venues and with this single firmly plated their "freak flag". 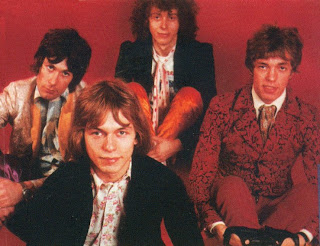 Tomorrow: Keith, Steve, Twink and Junior 1967
There is no other way to describe "My White Bicycle" but a complete and total psychedelic mindf*ck. From it's backwards intro (well most of the song is pretty much backwards musically...) to it's topical lyrics ("policeman shouts but I don't see him, they're one thing I don't believe in") and right down to it's subject matter it's a perfect encapsulation of what 1967 should have sounded like. The whole thing moves along with a backwash of backwards cymbals and metronome mechanical beat with swatches of sonic guitar licks behind Keith West's untouched vocals keeping it all "straight". For those not aware, in the 60's Dutch activists called the "Provos" placed white bicycles around Amsterdam for communal use for individuals to share and deposit once they were finished with them for someone else to use. Whether this had any influence on the song I'm not sure but it wouldn't surprise me. The flipside, "Claremount Lake" is lysergic in lyrics only. Excluding Howe's brilliant raga trills it's pretty much a straight ahead mod/freakbeat number that is night to the A-side's day. I have an audio cassette copy direct from the master tapes at EMI's Abbey Road from the early 90's and according to the person I got it from the tape box for this track was not only dated 1966 but credited to The In Crowd. This is plausible as The In Crowd's three singles were all on Parlophone where the band were presumably still signed . It is interesting to note that also in EMI's archives were two tracks ("Blow Up" and "I Am I Glad To See You") that were unearthed for a Keith West CD compliation on RPM that the The In Crowd had recorded for possible use in their pal David Hemming's 1966 film "Blow Up" but were never used.
Both sides are on numerous CD reissues of their untitled 1968 LP.