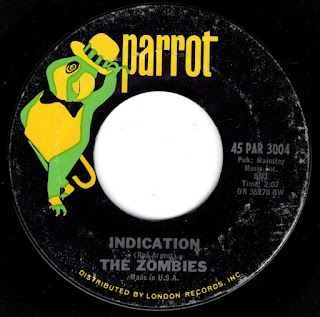 THE ZOMBIES-Indication/How We Were Before US Parrot 45 PAR 3004 1966
Despite the fact that they were far bigger in the US than at home in the U.K. beat quintet The Zombies had fallen on hard times, commercially, by the time Parrot issued their eighth and final American single for the label, "Indication" in July of '66 (it was issued in the U.K. at the same time as Decca F 12426). Unfortunately the American single version of "Indication" is edited (more on that in a bit). Both countries featured "How We Were Before" on the flip side and the single failed to chart in both places. It does however, remain one of their most sought after releases.
"Indication" is probably one of the most progressive Parrot/Decca era songs with it's raga feel to the guitar from Paul Atkinson sounding almost ratty and it's interplay with Rod Argent's jazzy arpeggios on his electric piano. It's frantic, different and extremely enjoyable. As the number winds down Argent begins ad libbing all over the place as the vocals follow the melody through an array of changes. The vocal improvisations and Atkinson's repetitive guitar licks make it sound "way out" (almost possibly "raga") and at odds with anything they ever did, but not too way out. BUT unfortunately the US version here hacks most of that ending off, clocking it at 2:07, the original UK mix is 3:00!! According to the liner notes of the "Zombie Heaven" box set Atkinson despised it and was not happy with it! 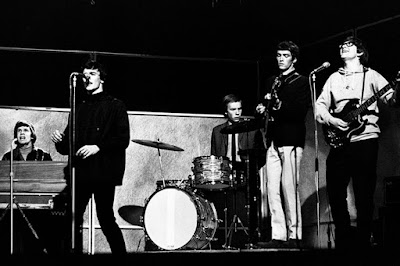 "How We Were Before" is a decent track but it sounds incredibly dated by 1966, like a wayward step cousin of "Leave Me Be" or "I Must Move" with it's gentle acoustic guitar and multi layers of harmonies (the bongos are a nice touch too). It's not unlistenable, but it's not something I find myself going back to repeatedly. It's "old" sound is because it was cut back in July of 1965 and was no doubt dug up because a B-side was needed to facilitate the single's release.
Both tracks are on a host of compilations put out by Big Beat over the past two decades.
Hear Colin Blunstone and Rod Argent discuss "Indication" here.
"Hear Indication (unedited version)":
https://youtu.be/_W5mLHJRe5Q
Hear "How We Were Before":
https://youtu.be/LuOIhc9PeFU
By William - October 25, 2021