Them- "Half As Much" 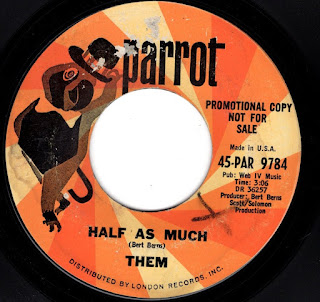 THEM-Half As Much/Gonna Dress In Black U.S. Parrot 45-9784 1965
Such was the faith in Belfast, Nortrhern Ireland's Them that their U.S. label Parrot issued eight of their nine U.K. Decca 45's here and like fellow Parrot/Decca label mates The Zombies the imprint continued to plug on long after their hits dried up.
"Half As Much" (issued in the U.K. as "It Won't Hurt Half As Much") was the band's fifth U.K. single (Decca F 12215 August 1965), it was simultaneously released here where it was their fourth 45. It failed to chart in either country unfortunately. Penned by Bang records supremo Bert Berns (who also produced it in addition to the same for their previous number "Here Comes the Night", a #2 hit in the U.K. and #24 in the U.S. respectively).
"Half As Much" is fairly mundane, I've always been amused by Van Morrison's British accent on "little" in the track, it's certainly not the band's worst track, but not among their best either. It was later recorded by Garnet Mimms (as a B-side in 1966). 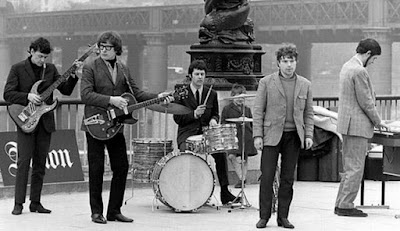 For me the gold is on the flip, "I'm Gonna Dress In Black". Led by an organ it's gritty and almost sleazy. I always get a kick out of hearing Van Morrison sing about "way up in the hills in Georgia" with conviction that makes you believe he really has been there! The organ reminds me of The Animals and adds to the perfect, bluesy/dirge feel to it all!
Both sides appeared on the hodge podge final Them LP "Them Again" (1966) and are also available on the amazing comprehensive three CD set "The Story Of Them Featuring Van Morrison".
Hear "Half As Much":
https://youtu.be/cyOg3KfC94Q
Hear "I'm Gonna Dress In Black":
https://youtu.be/0Jv6Y56aDI8
By William - October 12, 2021

Email ThisBlogThis!Share to TwitterShare to FacebookShare to Pinterest
Labels: Them, Van Morrison