Tony Colton and Ray Smith have been responsible for a host of great UK 60's tracks. Colton recorded several of them on his own as well and is responsible for dozens tracks co-authored with Smith.  For a comprehensive look at Tony Colton and his genius head on over here for the full story. Picking ten of them from the 60's wasn't easy but here goes, all tracks are U.K. releases unless otherwise noted: 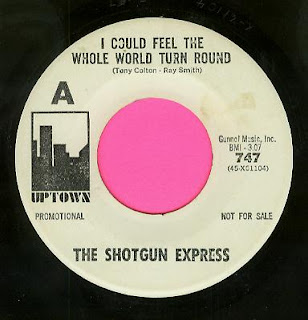 1. THE SHOTGUN EXPRESS-"I Could Feel The Whole World Turn Round" UK Columbia DB 8025/ US Uptown 747 1966
Beneath shimmering strings and the funky Hammond mod groove laid down by The Peter B's, Rod "The Mod" Stewart and Liverpudlian lass Beryl Marsden duet on what has to be the most powerful U.K. r&b duet ever. Sadly this Shotgun Express line up was short lived and Rod Stewart departed making one wonder what other greatness they'd have achieved had he stuck around. The band's second and final 45 (sans Sir Rodereick) was another Colton/Smith tune "Funny Cos Neither Could I".

2. ZOOT MONEY & THE BIG ROLL BAND-"Let's Run For Cover" Columbia DB 7876 1966
In my estimation Zoot Money's most soulful track is this mid tempo soul burner from March 1966. Beneath the Big Roll Band's spot on Hammond n' horns formula Zoot and Co. really swing.  The first time I ever heard this I thought it was a cover of an obscure US r&b side.  The flip "Self Discipline" is also a Colton/Smith composition.

3. TONY COLTON-"I've Laid Some Down In My Time" Pye 7N 17117 1966
This was Tony's third and final Pye 45 from a short but brilliant run with them (we discussed his first 45 on Decca here). "I've Laid Some Down In My Time" eschews the jazzy/r&b of his previous singles for an all out freakbeat assault on your ears.  Full of distorted/fuzz guitar, some Nicky Hopkin's style piano tinkling that give it a sound not unlike the first Who LP and some very brash lyrics full of bravado, Tony sings about "I've done some things people might call a crime, and I've laid some down in my time". He would be quiet few a few years until a 1968 45 for Columbia "In The World Of Marnie Dreaming"/"Who Is She" (DB 8385). 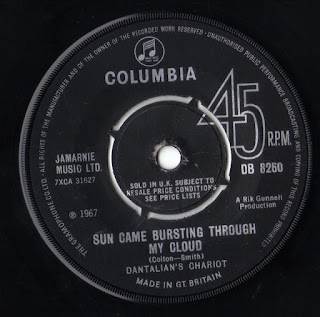 4. DANTALIAN'S CHARIOT-"Sun Came Bursting Through My Cloud" Columbia DB 8260 1967
"Sun Came Bursting Through My Cloud" was described by someone once as "beautifully sublime" and I can think of no better way to describe this track.  Hidden away on the B-side of the lyserigcally brilliant "Madman Running Through The Fields" , this track is a laid back, almost jazzy little number that's a perfect "comedown" from the full on acid trip that is side A. Clearly an indication of things to come for Zoot's solo LP (see #7 below).

5. GEORGIE FAME & THE BLUE FLAMES-Red Number Nine" previously unreleased 1965 recording , compilation /box set "It's Got the Whole World Shaking" Polydor/Universal 2015
This previously unreleased 1965 Georgie Fame recording would have made an excellent single or sat well on his "Sweet Things" LP but for reasons unknown it was never issued in the 60's. It's bar far one of Fame's catchiest recordings with some cool, jazzy vocals and the precision horn/Hammond work by the Blue Flames whilst telling the tale of a compulsive gambler. 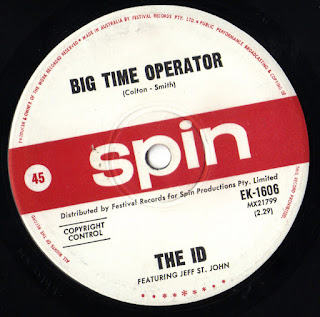 6. JEFF ST. JOHN & THE ID-"Big Time Operator" Australia Spin EK-1606 1966
Wheel chair bound as a result of spina bifida, Downunder soulful voiced Jeff St. John made a career in his native Australia covering US r&b numbers . In December 1966 he took Zoot Money's UK #30 hot and covered it for the Aussie market. Despite St. John's powerful pipes and The Id's solid backing the track is little more than a note for note copy of Zoot Money's interpretation, no bad thing, just uninspired and pointless.

7. ZOOT MONEY-"The Coffee Song" LP track "Transition" Direction 8-63231 1968
"Coffee Song" was first covered by Cream during the sessions of their debut LP "Fresh Cream" but was not used until subsequent later pressings. It was also cut by The Shevells in 1968 (UK Polydor 56239).  Zoot Money cut it with his short lived band Dantalian's Chariot (though it was never issued by them until 1995's "Chariot Rising" compilation). It was however utilized the following year for Zoot's debut solo LP with a few other Dantalian's tracks.  It's my favorite Colton/Smith tune and is a wonderful little ditty about a chance meeting between two strangers in a railroad cafe where one half leaves a note at a table for the other which remains for ages with some great breaks.

8. THANE RUSSAL-"Drop Everything And Run" CBS 202403 1966
After the previous smoldering two sider of Otis Redding's "Security" b/w "Your Love Is Burning Me" (CBS 202049) Thane Russal's next release was this orchestrated Colton/Smith composition full of enough bells and whistles to make it sound like something you'd find on Immediate records (orchestration care of Arthur Greenslade, who would actually handle the backing on some Chris Farlowe stuff so I'm not too far off).  Oddly it also bears some similarities to "Between The Buttons" era Stones and despite lacking the bite of it's CBS 45 predecessor still works. 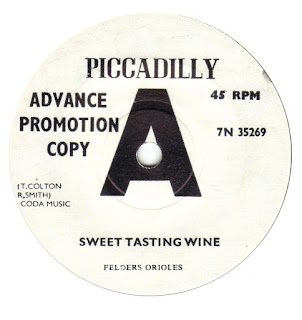 9. FELDER'S ORIOLES-"Sweet Tasting Wine" Pye 7N 35269 1965
I have dug this track for almost 20 years since Nick Rossi turned me onto it and it was only when Nick sold me his copy last year that I realized that it was written by Tony Colton/Ray Smith! "Sweet Tasting Wine" is a slow, almost dirge-like r&b tune that smolders through a slow build up with some subtle organ/sax backing not unlike one of Them's more somber LP cuts.

10. THE MERSEYBEATS-"I Stand Accused" Fontana TF 645 1965
In late 1965 The Merseybeats informed their new managers Kit Lambert and Chris Stamp that for their next release they would like to cover "I Stand Accused".  Lambert & Stamp duly went out and secured the rights to it. Unfortunately the band meant the Jerry Butler number of the same name and were now saddled with this composition which Tony Colton had previously released in July 1965 (Pye 7N 155886). The Colton original is a slowed down, soulful affair not unlike a mid tempo Zoot Money or Georgie Fame tune. The Merseybeats rock it up with an incessant/catchy guitar lick and some baroque harpsichord and quicken the pace considerably.  Keith Moon was on hand for the recording and sounds a gong at the end of the track. Elvis Costello dug this version it so much he later covered it on his "Get Happy" album.