Fearns Foundry (or Fearn's Brass Foundry as they were called back home in the U.K. on their two singles they released on Decca) were a seven piece blue eyed soul band from Leicestershire. This release was their second and final U.K. single issued as Decca F 12835 in September 1968. It was released here in November.
"Now I Taste the Tears" (originally cut by a U.S. group called The Smiths) is a somber tale of heartbreak and woe that's completely dark, but compels you to listen. The strings sound straight off a Scott Walker record adding to the bleak feel of the track and lead singer is totally soulful. The lyrics are completely black:
"Try to watch the TV reception ain't so clear, walk into the kitchen, I guess I'll have a beer, then I find the letter, now I taste the tears....lady says she's sorry for the wrong she's done, lady said forgive her but what is done is done, walk into the bedroom then I find my gun....".
The strings (with subtle horn work) carries the number out after that disturbing verse. Wow, that is some HEAVY shit, but what a track! 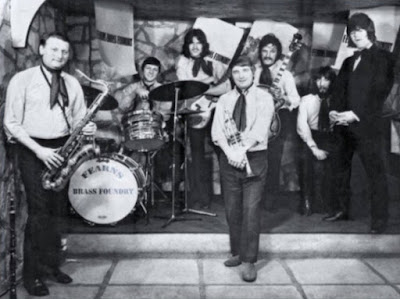 The flip, "Love, Sink And Drown" is equally depressing lyrically, but no on dies in this one...I think? It's backed by some heavy brass and is a slow ballad akin to "Temptation Bout To Get Me" by The Knight Brothers. The shimmering strings and brilliant horns make it sound musically like a U.S. 60's r&b ballad!
"Now I Taste The Tears" was comped on Psychic Circle's "New Directions 4: Hide And Seek" CD and both tracks are available on Spotify.
Hear "Now I Taste The Tears":
https://youtu.be/V3pnr0noi7k
Hear "Love, Sink And Drown":
https://youtu.be/Pd9AlBj6qUk
By William - January 10, 2022