Warm Sounds were one of many duos in the pop psych genre in the mid/late 60's U.K. that included Twice As Much, The Young Idea and The Truth. Warm Sounds were two English gents named Barry Younghusband and Denver Gerrard. Signed to Deram records in early 1967 the label launched their debut in the U.K. in April as Deram DM 120, our subject here was issued in the United States the following month.
"Birds And Bees" is a cheeky pop psych bit of choral pop that sounds like Spanky & Our Gang meets The New Vaudeville Band (the later because of the camp "English" lead vocal delivery). It's wrapped in vibes, strings and lushly orchestrated/produced with great harmonies, a quintessential slice of Deram pop-sike and was  produced by Mike Hurst. 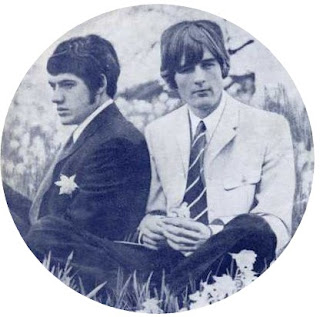 The flip side, "Doo Dah" is a slow, mundane track with precise harmonies but offers absolutely nothing redeeming to this man's ears! The band went on to cut one more 45 for Deram, the total freakout "Nite Is A Comin" (issued in the US and the UK and probably the first song to ever name check The Grateful Dead!!) which was released after a brief foray on Immediate records with "Sticks And Stones".
"Doo Dah" appeared on the excellent late 80's Decal records compilation "Deram Daze", and "Birds And Bees" was issued on the CD compilation "Pop In Volume One".
Hear "Birds And Bees":
https://youtu.be/SE2YQMndU6g
Hear "Doo Dah":
https://youtu.be/HZo5TfCEtBI
By William - January 04, 2022