Chris Andrews, a virtual unknown in the U.S. was best known in the U.K. as a song writer behind several hits, especially for Sandie Shaw who made the Top Ten in Britain with his tunes "Girl Don't Come", "I'll Stop At Nothing", "Message Understood" and "Long Live Love".
"Yesterday Man" was his solo debut (of sorts, he previously cut a 45 for Decca in '63 as "Chris Ravel and The Ravers" and received double billing with Adam Faith (another artist who recorded his material) with backing by our heroes The Roulettes. It was issued in the U.K. as Decca F 12236 in September of '65 where it went to # 3, released here two months later it did absolutely nothing.
"Yesterday Man", written by Andrews,  is a mid tempo number backed by some brass that has an almost cod ska feel to it and musically reminds me of a Sandie Shaw record (I swear I can hear her caterwauling on the backing vocals). It's infectious and quite an ear worm, for me anyway, and in a good way.
Speaking of Sandie...on the flip we have "Too Bad You Don't Want Me", which she recorded for her second long player "Me" in 1965. Like the A-side it's another Andrews composition and like Sandie's version it's almost beyond the singer's range creating quite a vocal strain that makes for an almost unlistenable feel. Mores the pity because the musical backing is catchy as hell! 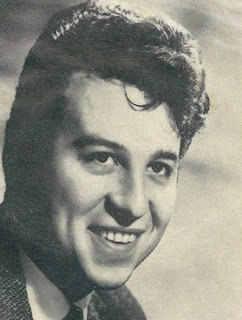