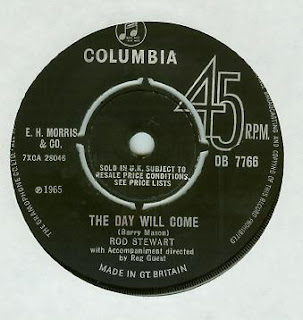 "Rod The Mod" took a rather strange genre turn after his debut 45 "Good Morning Little Schoolgirl"/"I'm Gonna Move To The Outskirts Of Town" (U.K. Decca F 11996 1964) when this next release saw him jump from Decca to EMI's Columbia label. Instead of the bluesy r&b of his debut seven incher this one found Rod in the studio full of session men lead by bandleader Reg Guest (best known to you 60's types for his ultra rare 45 and LP as The Reg Guest Syndicate). Both sides were composed by Wigan born songwriter Barry Mason and marked another contrast to Rod's previous single besides just the music. Both the A and B side of Columbia DB 7766 embrace the concept of "social commentary", though such sentiment from a song writing factory like Mason could hardly be deemed as relevant of such tunes by Bob Dylan or Ray Davies. Both sides seem like an ill advised attempt at plucking the heartstrings of Joe Public for the sake of selling a record. The A- side is about the coming of a nuclear war while the B-side explores the downfall of humanity through apathy, violence and moral decay.

Obviously this sounds like a lot of b.s. and I'm sure whoever was handling Rod at the time no doubt nudged him in this direction, but at the bottom of it all both sides are enjoyable. "Why Does It Go On" would've made a stronger A-side with it's soulful intro of heavy bass/handclaps/backing vocals accented by some snippets of cello. Rod's vocals are strong and quite self assured. The B-side, "The Day Will Come" is less soulful but carried by some heavy horn section work with the same backing vocals as the flipside. Musically it wouldn't have sounded out of place amongst some Mark Wirtz material, notably "Theme For A Teenage Opera" and the like.

Rod The Mod quickly returned to his r&b roots with his next Columbia 45 rpm when he enlisted the musical backing of The Brian Auger Trinity......

"The Day Will Come" for your listening pleasure: 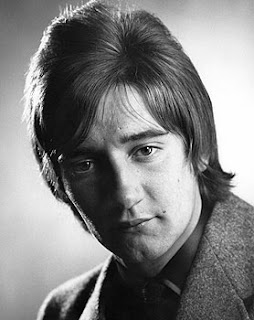