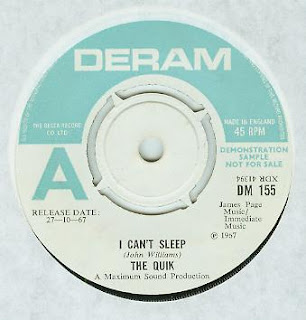 These guys were one of those beautiful 60's U.K. bands who dressed mod as hell, stayed true to their soul/r&b roots but were not afraid to get a bit "freaky". Too soul to be freakbeat and too soulful to be psychedelic The Quik were a unique group who'd cut their teeth on two prior Deram releases: a slowed down come-down version of The Rascals "Love is A Beautiful thing" b/w the mother of all mod Hammond dance floor instros "Bert's Apple Crumble (Deram DM 121) and the uptempo Hammond n' horns mix of "King Of The World" b/w a pointless version of "My Girl" (Deram DM 139). Not afraid to break out the B-3 (or was an an L-100?) AND get freaky this was The Quik's last offering anywhere and appeared on October 27, 1967.

"I Can't Sleep" is a strange number. It features a swirling chorus awash in phased organ and sound effects with wiggy lyrics :"Moonbeams flying high, I can't catch them if I try..." on it's first time around and then "stars, sky everything high everything good goes flying by..." chanted repeatedly like a mantra of someone trying not to let the music take them away on the final chorus (or a talk down from a bad trip?). It breaks into a brief vocal interlude on the bridge where the lead singer slows down for some Lloyd Price style crooning and is accompanied by a flute. It's chorus, is at best, one of those mod numbers that seems to evoke an amphetamine breakdown or early psyhcedelic trip (much like John's Children's "Smashed Blocked" with it's anxiety ridden intro). Fortunately this all works and the number is nothing short of amazing.

The flip "Soul Full Of Sorrow" is less trippy but still has it's weird lysergic moments thanks to some out of place chord changes amongst the Hammond n' horns (including one bit where a sax noddles around and incorporates the melody from Dobie Grey's "mod" anthem "The IN Crowd") amidst the angst ridden lead vocals. The somber mood with constant sax and organ reminds me of The Graham Bond Organization's last two (U.K.) Columbia 45's. The vocalist sounds slightly reminiscent of Eric Burdon when he gets (got?) all bluesy and sullen too!

Both sides wound up on a CD comp See For Miles did in the late 90's called "Psychedalia" of various Deram/Decca/Fontana U.K. 60's/early 70's "psych" sides (complete w/ free seeds in the CD spine to "start your own psychedelic garden") and I'm certain it's been bootlegged by those clever sorts who've put out all these classic U.K. 60's 45's w/ convincing labels and large sized U.S. 45 style holes in the center!