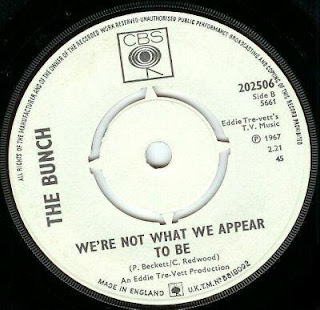 THE BUNCH-You Never Came Home/We're Not What We Appear To Be U.K. CBS 202506 1967
In my quest to find the not yet unearthed, not yet comped and the not reissued 600 times on 600 different compilations ("Circles" by Les Fleur De Ly's anyone?) British 60's mod/freakbeat tune I was turned onto this two sided mod/r&b monster by Ivy Vale a lady who ran a wiggy little night in NYC back in the day called "The Mind's Eye". Ivy was always generous with her more than ample 60's 45 collection and I benefited from her many compilation cassettes. Both sides of this one were new to my ears because I'd never heard of it let alone heard it! Long being a fan of Georgie Fame and other "Hammond n' horns" style British r&b combos AND British r&b after everyone realized it was boring covering blues & r'n'r standards this one bit me right off! 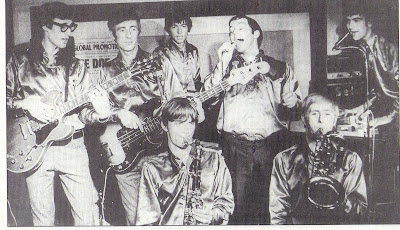 My fave of the two tracks being the B-side "We're Not What We Appear To Be". It sounds alot like the post Alan Price era Animals where the band grew a pair and started using a Hammond, fuzz guitar and dropped all those boring ass Chuck Berry covers. I'm not sure if it's because the lead singer sounds a bit like Eric Burdon or because there's this cool little fuzz guitar riff shuffling around it, but it reminds me of "Inside Looking Out" or "Cheating". Though the record is from 1967 it sounds like '65 or '66 and the lyrics must've sounded somewhat dated: "We all drive in red sports cars, Sybilla's club at night, Carnaby Street on Saturday mornings until we're out of sight..". Spot on stuff here.


The A-Side "You Never Came Home" has more Burdonesque vocals but there's some cool Hammond and horns interplay here that sounds like my Manchester mod faves The St. Louis Union (more on one of their 45's soon!) meets Georgie Fame. It puzzles me how at the height of psychedelia A&R people at CBS were issuing groovy 45's like this! Sadly the band "got with it" and their next 45 was a weak psych-pop thing, never to return to this groovy formula.


The "You Never Came Home" popped up on the "New Directions Volume 2: Floor Filler Killers" CD and "We're Not What We Appear To Be" was unearthed by Psychic Circle for their "We Can Fly Volume 4" compilation.

Hear "We're Not What We Appear To Be":

I know this comment is 8 years after your post, but I appreciated your thoughts on the 45. I've always thought the singer sounded like Eric Burdon, and I love the lyrics!