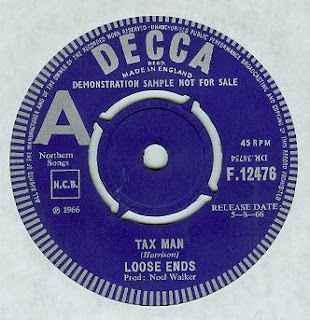 The Loose Ends-Taxman/That's It U.K. Decca F.12476 1966
Covers of Fab Four songs from the 60's were usually ill advised affairs, one just need look at all those limp versions of "Girl" that cancelled each other out in a shot at the charts in the U.K. To counter this I give you The Loose Ends, a brilliant little band who earned that freakbeat/mod-r&b tag bestowed to those nattily attired English 60's bands worthy of it by (former) record collecting nerds like myself. They'd previously cut a raw and exciting version of The Rascal's "I Ain't Gonna Eat Out My Heart Anymore" (complete with a blistering freakbeat guitar solo) b/w a version of an excellent rare Moody Blues tune called "Send The People Away" (or as The Moodie's titled it on it's only release, a French E.P. "People Gotta Go") as Decca F.12437. It failed to do much, but Decca gave them another shot.

This time around the band scored a major coup in covering a thus far unreleased George Harrison composition called "Taxman". However it was released on the very same day that "Revolver" hit the stores; August 5th, 1966. Decca, having turned down The Beatles four years earlier were never known for their brilliant music business masterstrokes. A clipping that I found in "Disc & Music Echo" claimed that the band were going to present a copy to Prime Minister Harold Wilson at No. 10 Downing Street, though I'm inclined to believe this was typical of all the P.R. b.s. bands fed to music weeklies and probably never occurred! The band stick to the Beatles version in melody only, the tempo is amped up considerably (I'd call it amphetamine driven) and has a funky organ giving it a mod/club/soul feel no doubt gearing for groovin' on the floors at in-spots. When Scott Belsky and myself had our own little "in-spot" in the form of Hub City Soul in 1997-1999 I played the crap out of this record and it never failed to keep it moving! The most interesting part that separates it from The Fab's version is that instead of relying on Macca's (that's right Paul played the lead. Don't believe me? Ask him or read Geoff Emerick's book, nailed it one take too!) psychedelic lead The 'Ends have a simplified lick that plays along with some organ trills instead. Throw in some S.D.G. (that's Spencer Davis Group for those not in the know) style percussion and you've got yourself a groover that went nowhere commercially. Flip it over and you've got another mod/r&b number "That's It", which reminds me of The Primitives or one of those other Pretty Things aping Brit 60's r&b bands who got a dash of "soul" on their last records. It's bass and guitar riff is catchy and even faster played than the A-side but the lead vocals and almost call and response backing vocals give it a distinctly "soul" feel. Sadly nothing else was heard of the band after this, pity as it's quite good!

"Taxman" was comped by Decca/Deram on their "Freakbeat Scene" CD whilst "That's It" popped up on their "Mod scene" CD.


"Taxman" for your listening pleasure:
http://www.youtube.com/watch?v=UjDq7PkFI0c