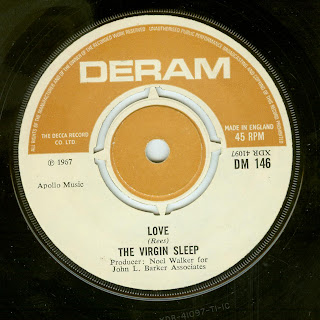 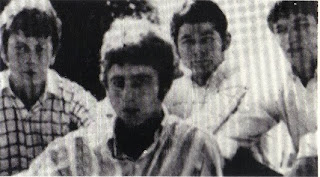 I've long been enamoured by freaky British 60's records cut by straight looking mod guys in immaculate hair, Hush Puppies and Ben Shermans (Herbal Mixture, The Score, The Flies, to name but a few). Enter Virgin Sleep (Tony Rees, Rick Quilty, Alan Barnes and Keith Purnell) from Richmond, Surrey. One look at their photo above would lead you to believe they were just another Small Faces/Action aping "mod" band. One listen and you know right away that this is NOT a "mod" band.


The A-side, "Love" loosely follows a chord progression and tempo not too dissimilar to The Trogg's hit "Love Is All Around". Strangely it's Deram release date was 9/1/67, a month and a day prior to The Trogg's number! It is doubtful that they influenced each other, but still a strange coincidence to note. It's backed by a string section that reeks of The Trogg's hit but also echoes The Left Banke and some of the more orchestral moments of David Bowie's debut LP (also on Deram), while the backing vocals have an eerie Buddhist chant quality to them, with some sitar thrown in there for either good measure or trendiness. The whole mix is absolutely hypnotic and I find it to be among the greatest of British 60's psychedelic singles issued.

The B-side, "Haliford House", is more somber and definitely not a very joyous tune. It's about a mental institution where children's toys are manufactured. It's vocals are monotone, as if the lead singer is heavily sedated and other than a brief, blistering freakbeat guitar rifff here and there it's pretty low key and uneventful.

"Love" has popped up on both the "The Great British Psychedelic Trip Vol. One " CD compilation and Mojo magazine's box set " Acid Drops, Spacedust & Flying Saucers: Psychedelic Confectionery from the UK Underground, 1965-1969", while "Haliford House" has appeared in bootleg form only on one of the "Hen's Teeth" CD compilations.