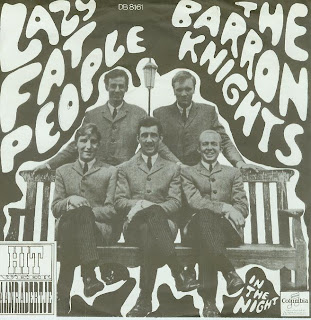 Long before Randy Newman raised the world's hackles with a track called "Short People", one Pete Townshend provided a well known U.K. comedy/cabaret/rock n' roll quintet called the Barron Knights with an unreleased track of his doing who released it as a single in March 1967....This of course was not a unique instance as The Pudding would release an unheard of track of his called "Magic Bus" (Decca F12603) the following month (and a whole year before the Who's version) and Oscar had launched his "Join My Gang" the previous year.


"Lazy Fat People" is a firmly tongue and (in?) cheek number about...well...lazy fat people.  It's jaunty and a bit "odd" in the same way "Whiskey Man" or "Boris The Spider" were.  It's vocal delivery seems to anticipate Queen but the rapidly ascending harmonies add to the whole satirical feel to the number by giving it an almost acapella feel.  Lyrically I'm sure people were and possibly are offended by it but I'll take that with a grain of salt as I quite enjoy it.  The B-side is another pointless exercise in, well a pointless B-side. 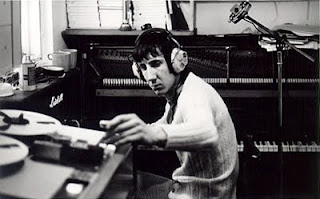 Strangely I don't think this number has ever been reissued, but someday someone needs to do a "Songs of Pete Townshend" CD comp the same way they've done with The Bee Gee's and David Bowie!

I just stumbled on this site. I loved this song. I'll think of it the next time I'm stuck on public transport with some 300 lb thing......

Castle was supposed to issue a compilation of Townshend songs done by others entitled "For Pete's Sake" but they went under before it got released. I've also read "Lazy Fat People" was written about Allen Klein.