1. THE BEATLES-"Revolution"
Shut up or tool up.  It's really quite simple.  Ranting about the state of the world on social media never changed a fucking thing.......

2. THE GRAHAM BOND ORGANIZATION-"Baby Make Love To Me"
Jazzy yet bluesy this Jack Bruce sung (and written with help of his then wife Janet) track has always been one of my faves from the G.B.O.'s debut LP "The Sound of '65" creating an almost near Eastern feel with the repetitive harmonica vs. saxophone duel throughout beneath Bruce's zooming bassline. 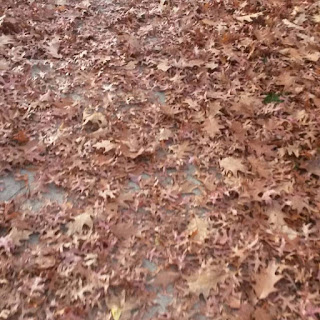 3. THE KINKS-"End Of The Season"
A perfect number for Autumn changing into Winter. You can't beat the '66-'67 Kinks stuff as they were so counter culture, everyone was all peace and love and in crowd discotheques and boutiques and Ray Davies was blowing a brown ale scented raspberry at it all from his suburban enclave.

4. HAROLD JOHNSON SEXTET-"Sorry Bout That Part 1"
An old girlfriend turned me onto this track in the 90's on one of Rhino's "Cocktail Mix" CD compilations and this boss little sax driven jazzy instrumental was one of my favorites on it. Released as a single in 1966 on the Los Angeles H.M.E. label I have yet to come across a copy!

5. HAYDOCK'S ROCKHOUSE-"She Thinks"
Sacked Hollies bassist Eric Haydock must have surprised a lot of people when he promptly put together Haydock's Rockhouse, a sophisticated mod r&b combo who as the name implies played "rockhouse" as personified by the likes of Georgie Fame & The Blue Flames. This jazzy number with cool sax and a vibe solo graced the flip of their debut 45, a cover of Sam Cooke's "Cupid".

6. JOE SIMON-"I See Your Face"
The beauty of the r&b genre is that it's a bottomless pit with new tracks to discover every day.  Enter this slightly obscure 1961 single on the Hush label with cool jazzy flute and a mid tempo slow burn that seems to at times sound like "Pretty Girls Everywhere". 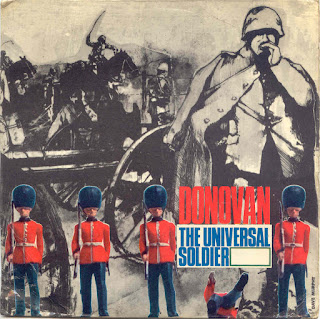 7. DONOVAN-"Do You Hear Me Now"
I had never heard this track until I discovered it on the BBC "Psychedelia Britannia" documentary last month. So much of Donovan's denim folkie period is easily lumped together as truth be told it gets a bit tedious but this one has quite a bit of "umph" and it's short! From his "Universal Soldier" E.P.

8. THE MOODY BLUES-"Red Wine"
This is one of the unreleased '66 Moodies tracks produced by Denny Cordell that was unearthed for the deluxe reissue of the "Magnificent Moodies" album. Sung by their "new" bassist Rod Clark (formerly of The Monotones) it really reminds me of The Four Pennies on a few of their rocking tracks. Sadly within a few months Rod was gone and so was Denny Laine.

9. THE ACTION-"Things You Cannot See"
The Action's "Brain"/"Rolled Gold" albums will always be a guilty pleasure of mine.  Sure their 5 singles are incredible but there's something about tracks like this one that never fail to disappoint me no matter how half baked (pun intended or not, your choice) they sound and give pause for thought what they would have accomplished had they been given a second chance and been signed by a major label again. 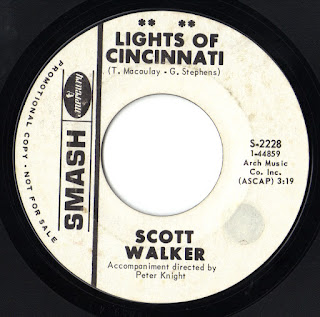 10. SCOTT WALKER-"The Lights Of Cincinnati"
I had long overlooked this number in favor of most of what I perceived as his stronger LP tracks and always thought this was too schmaltzy (indeed it turns out I owned a 45 of it for what must be a good 20 years or so and only just came across it). But times and tastes change and maybe I'm getting old and sentimental (deffo the the former) but I dig this.