Whilst in conversation on F.B. with my old former NYC based DJ pal Layla Boschetti about the President label I decided it would be interesting to come up with ten cool 45's on this U.K. outlet of cool.  I could have just as easily picked ten Equals singles on the label but decided that would be too easy. President ran in the U.K. from 1966 all the way to 2006 and had records issued in Germany, Italy, the USA, Australia, Belgium and the Netherlands.  They were extremely diverse for a small label running the gamut of psychedelia, ska/reggae, soul/r&b, blues, M.O.R. pop and even American garage! For the sake of brevity I stuck with U.K. issues only. 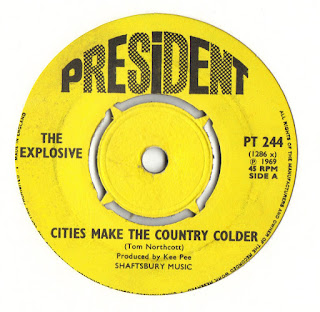 1. THE EXPLOSIVE-"Cities Make The Country Colder" PT 244 1969
This number starts out with a great little Small Faces '66 style instrumental bit with Steve Cropper style guitar licks and funky organ before fading out through what sounds like an old transistor radio (if you remember those?) and bouncing back into a hook laden, melodic, catchy poppy ditty not unlike The Move and goes out the same way it came in.

2. HAT AND TIE-"Finding It Rough" PT 122 1967
Hat & Tie were not really a band but a studio project consisting of future Nirvana guy Patrick Campbell Lyons and producer Chris Thomas.  It's an amazing track with this buzzing, incessant, fuzz guitar lick that repeats over and over through most of the track and was first unearthed back in 1991 on "Circus Days Volume 3". Interestingly the Everly Brothers later covered the track on their LP "The Everly Brothers Sing".

3.THE CAPE KENNEDY CONSTRUCTION COMPANY-"The First Step On The Moon" PT 265 1969
This 45 became much coveted because of it's trippy apocalyptic flip side "Armageddon" and the A-side was dismissed (unfairly) by Nigel Lees in "Record Collectors"  continuing article series "The Ultimate UK Psych A To Z" piece way back when.  I find it as equally amazing as it's flip if not better.  It has a wonderful intro that would do Joe Meek proud with spacey effects and neat keyboards (that also bring to mind Barry Grey instrumentals), subtle fuzz guitar and some cool harmony vocals (described as one YouTube comment as "The Association on crystal meth").  The Mellotron adds a very Rick Wright Pink Floyd '67 feel that seems to have inspired a Dukes of Stratosphear tune which I can't quite place. 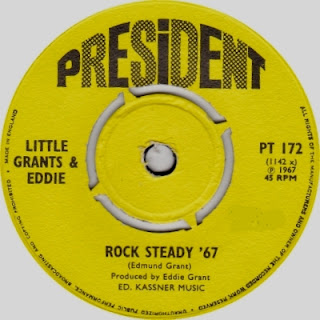 4. LITTLE GRANTS & EDDIE-"Rock Steady '67" PT 172 1967
We talked about Little Grants & Eddie's first 45 an earlier post and this was their 2nd and last 45 continuing the "Music Youth of 1967" feel. The track name checks Prince Buster, Desmond Dekker by the toaster who sings "Now '67 was the year of the ska" with a funky rocksteady beat with a cool mix of horns and strings.  The jury is still out on who was involved, hopefully some of you might now?

5. THE RENEGADES-"Thirteen Women" PT 106 1966
Ripping up Bill Halley's 1954 track this based British band (who made their mark in Finland and Italy) put it through the paces with some raw vocals, gritty fuzz guitar and and punctuated by a shrill/spooky organ lick.  One of President's rarest and most in demand 45's a copy recently went for $300+ on E-Bay.


6. RHUBARB RHUBARB-"Money Lender" PT 229 1968
I haven't a clue who these guys were but both sides of this 45 (the flip side was titled "Rainmaker") have lyrics that could be construed as "biblical".  "Moneylender" has a funky effect on the guitar and a catchy chorus that lead this track into a genre firmly known as "freakbeat".

7. THE LEAGUE-"Hey Conductor" PT167 1967
This 1967 flip of their sole 45 "Nothing On" (which is a decent track too) sounds like it was recorded at least two or three years prior as it's a mid tempo beat number with a steady groove and some Hollies inspired high notes that recall  their hit "We're Through". Originally released and cut in the States by Sonny Flaherty and the Mark V in August of '67 (Phillips 40479). Again I'm clueless on anything about these guys, this track was produced by former Riot Squad lead singer Graham Bonney (who co-wrote the a-side "Nothing On"). 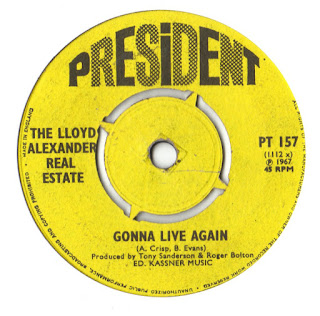 8. THE LLOYD ALEXANDER REAL ESTATE-"I'm Gonna Live Again" PT 157 1967
My all time fave British 60's record NOT recorded by the Action or the Small Faces was this B-side of a cover of Chuck Jackson's "What You Gonna Do".  It's a powerful mix of soul/r&b/ska and freakbeat with an "I'll Be Doggone" style riff behind some ska "vocal percussion" ala "Guns Of Navarone". MONSTER!

9. JOHNNY WYATT-"This Thing Called Love" PT 109 1966
This monster soul number complete with vibes, amphetamine beat and female vocals was originally issued in the States in August 1966 on the Bronco label where it was produced by Barry White (who co-wrote it as well). It's also, understandably, a monster Northern soul 45.

10. MOUSE & THE TRAPS-"Beg Borrow And Steal" PT 174 1968
President issued this monster U.S. garage classic (originally issued in the States on the Fraternity label the year before) on the flip of the tepid "L.O.V.E Love".  I'm not going to waste your time writing about it as it's pretty well known and if you haven't I won't spoil it by yakking, have a listen.

Excellent stuff and a few more 45s to add to my list while digging around charity shops in North London. Gotta love the soul material that President leased from the Detroit Mar-V-Lus ans M-Pac labels too. Thank God that someone was releasing killers like "I Live The Life I Love" UK-side. Link: https://www.youtube.com/watch?v=a-AlRvQMwlI