And with the death of my comprehension.... 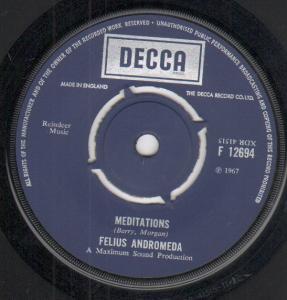 Possibly one of the oddest records of British 60's psychedelia is this one off 45 by the curiously named Felius Andromeda. At the time of it's release(November 1967) the band claimed in  "Record Mirror" that it was recorded in a North London church (the accompanying photo, see below, had them decked out in monk's robes and they went on to add that during a seance Old Nick himself sent a message that the record would be a hit).  None of this was true and none of it came true!  The tracks were actually recorded at Maximum Sound Studios in London, though the organ bits were recorded in a church near Willesden!  The band on the record were: Bill Haine (vocals), Pete Parks (guitar), Alan Morgan (bass), Dennis Couldry (organ) and Mick Richardson (drums).

"Meditations" is spooky, with it's churchy organ, Gregorian chant backing vocals, disembodied vocals (that sound like they're being sung by an acid casualty) and my favorite bit of all, the wiggy violins giving it that archetype Decca/Deram pop-psych feel that I spout off about so often here.  When I first heard it on the third vinyl volume of the "Chocolate Soup For Diabetics" series in 1986 after sleeping all day from an all nighter I was suitably taken immediately at how weird and way out it was. The lyrics are pure fried brain material in my book:

"through the ruins of my mind I see premonitions of my destiny, and with the death of my comprehension my heart is locked in my soul's redemption"

"Cheadle Heath Delusions" follows a bit of the same formula though sans the Gregorian chant backing vocals. The lyrics though not as way out are still pretty funny with lines about:


Interestingly enough the band were offered the option by Dick James to have the single released on Deram but went with Decca instead , not that it mattered it wasn't a hit!  The band disintegrated soon thereafter but I've noticed in the comments posted on YouTube by Mick  Richardson that the band reunited and played a gig in September 2010! 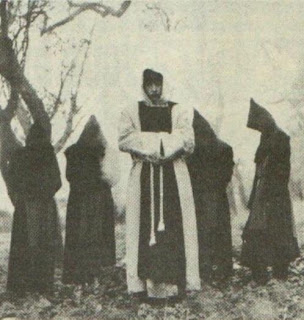 "Meditations" has been reissued on a variety of CD's, the easiest to find are Decca/Deram's excellent "The Psychedelic Scene", "Psychedalia" and "Chocolate Soup For Diabetics Volume Three". "Cheadle Heath Delusions" has been included on Bam Caruso's "Rubble 11: Adventures In The Mist" which can be found as part of the "Rubble Two" box set.