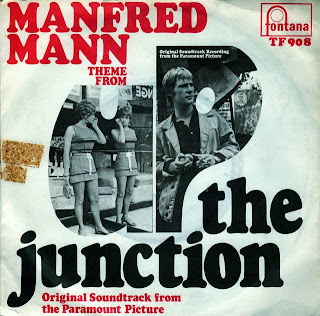 Manfred Mann were one of those rare British 60's bands who managed to stay on top from the beat/r&b boom through psychedelia despite personnel and genre changes. I've always much preferred the Paul Jones era Manfreds, nothing against Mike d'Abo, I think he's a fine vocalist I just thought that most of the Manfred Mann Mark II stuff was a bit too "bubblegum" for me (exceptions being their brilliant "debut" with him Dylan's "Just Like A Woman", their second 45 with him "Semi Detached Suburban Mr. James" and it's U.S. only B-Side "Each And Every Day" which was cut by Siomon Dupree and The Big Sound as "Daytime, Night Time"). Aside from that I'd rate their "Up The Junction" LP as the high water mark for me because I found little pleasure in any of their stuff like "My Name Is Jack", "Ha Ha Said The Clown" (which poses the question: which is more dreadful the Yardbirds or the Manfred's versions?!) or their huge hit here in the States "The Mighty Quinn" (not to be confused with a film of the same name, which I haven't seen but I'm sure sucks based on the premise of naming a film after a hit song). On the subject of that we have a song here today that also happens to be the title of a film.

1968's "Up The Junction" is one of my top ten favorite British films of the 60's.  I was just thrilled to see it's been released on DVD (in the U.K.).  I'm not going to give you the run down on the plot in detail but let's say it's like this, a deb gets bored with the mansion and Roller etc and takes a flat in the East End gets a job in a factory and becomes enamored with knees up's and all the gritty working class stereotype stuff whilst dating a young mod who in turn is so desperately keen to escape all of this.  The Manfred's soundtrack makes the film and I couldn't imagine a better band for it.

The title "Up The Junction" is certainly Brian Wilson-esque with it's layers of harmonies and production, not to mention numerous key and timing changes and a multitude of instruments.  Lyrically and musically  it's the perfect backdrop to the gritty, dreary factory worker setting of the film.  For anyone who's ever worked in a factory it's a pretty depressing thing and this number, to me, captures it all perfectly, in fact so much so it's close to the bone for me. "Sleepy Hollow" is not really my thing, it's a little too close to the saccharine pop period of theirs that immediately followed this 45/LP.  It's not unlistenable just way out of character from it's brilliant topside.

Both tracks are on RPM's reissue of the "Up The Junction" LP which I cannot recommend enough!

Hear "Up The Junction":

The last couple of D'Abo era singles - Fox On The Run & Ragamuffin Man - are pretty good.

I enjoy reading your bits about Manfred Mann. I think that they were pretty underrated & I think that's so because they probably thought they would rather be the British MJQ instead of a mere "pop" group. I like the Mark II edition, which had Klaus Voorman in it which was pretty cool. I think that "Each and Every Day" could have been a hit for Phil Collins if he covered it in the 80s or 90s.

D'Abo era Manfred Mann is rich pickings with excelent B-sides. Most of these 'other' sides are way beter than the poppy hit sides.

One md beat winner you'll really dig is 'Trouble And Tea' from their 'As Is' album. Gotta be the mono recording though!