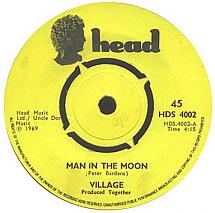 There are a slew of classic British 60's numbers that are so amazing, yet barely reissued who's original copies aren't exactly on par with that of say, a 60's Kinks 45 in the price tag department.  I never really was fortunate enough to own too many of these singles and since I like to write pretty much exclusively about records I've owned that leaves the category a bit slim.

On that topic I give you an obscure 1969 45 on the aptly named Head records label (home of both LP's by former Action members Mighty Baby).  I heard this track first on the dubious quality "Electric Sugarcube Flashbacks" compilation LP series (on the vinyl "Volume Four") and it took me awhile to get my head around the first few years as it was sort of "long" (4:15).  Led by British 60's organ r&b legend Peter Bardens this was their sole 45 and featured future Elvis Costello and The Attractions bassist Bruce Thomas.


"Man In The Moon" starts out with some ethereal organ and then gets a bit heavy with some great bottom end bass.  What I love about this record is it's from 1969 and despite the organ work it's not overly heavy like some of the plodding/wanky Deep Purple stuff of the period.  Halfway through it gets a bit "improvisational" but never too "way out" either.  It reminds me of early Atomic Rooster if they were a bit more "lysergic".

"Long Time Coming" is an organ based instrumental that's not at all heavy, it's a weird hybrid of 60's U.K. mod/r&b and British 60's instrumental theme music (like my faves The Barry Grey Orchestra for instance).  If not for the zooming bass runs I could easily imagine this as the theme song for some Gerry Anderson TV show with puppets!

It's perplexing but neither side had been officially released on CD until after Peter Barden's death.  Both tracks cropped up on his now out of print double CD compilation "Write My Name in the Dust: the Peter Bardens Anthology 1963-2002" and only the A-side had seen a reissue and that was on the above mentioned long player and an equally dubious catch all "Electric Sugarcube Flashbacks" CD volume in the early 90's.