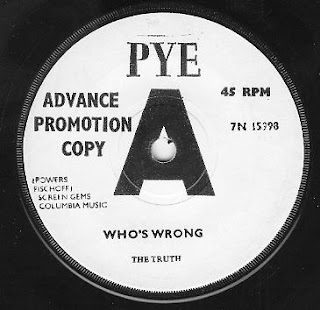 This was the second 45 by a 60's U.K. duo (Frank Ailello and Steven Jameson) known as the Truth (who made way better records than a bunch of flat-topped, bomber jacket wearing soulies in the 80's who also called themselves "The Truth").  In my book it's their best of all seven of their singles.  "Who's Wrong" is driven by a cool little incessant riff and some scowling vocals.  The lyrics are purely cynical;

"well this guy comes by and tells me I should cut my hair and wear a tie and he turns around does his best friend in, puts him in the ground and collects on him.."

But it contains a great line in the form of the chorus that innocently protests "I ain't hurtin' anybody by bein' me".  Pure mod/beat cool '65 style where the music is still sort of like a beat group but punchier.  "She's A Roller" is okay, not really my thing, but not unlistenable either.  The vocals and instrumentation are great it's just the song itself does absolutely nothing for me! 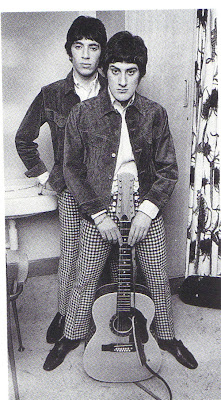 "Who's Wrong" has bee reissued on Castle's "Doin' The Mod Volume Four: Ready Steady Stop" CD compilation while "She's A Roller" has been included on their "Doin The Mod Volume One: The Go Go Train". Both sides are also available on the Truth CD collection/compilation "Who's Wrong: Mod Bedlam 1965-1969".
Trivia note:
Steve Jameson went on to make Northern Soul records under the moniker of Nosmo King in the early 70's.
Hear "Who's Wrong":
http://www.youtube.com/watch?v=1dya0acqDmE