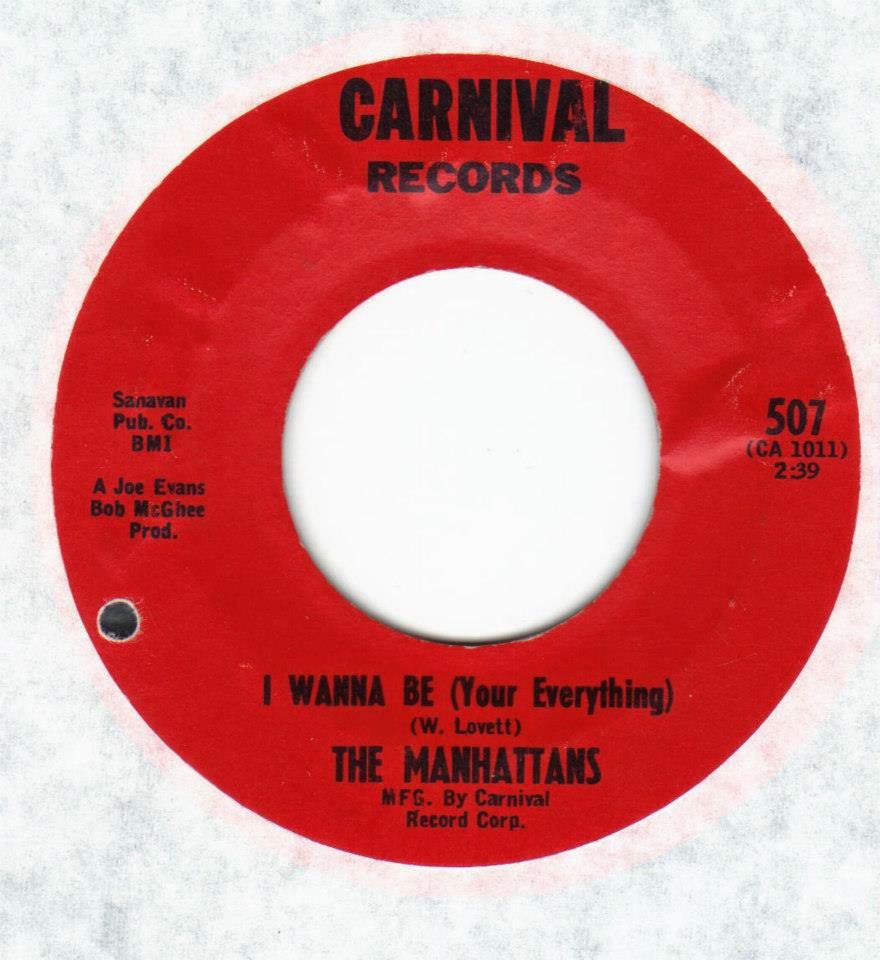 1.  THE MANHATTANS-"I Wanna Be Your Everything"
#1 on the 45 rpm rotation slot here at "Anorak Thing" H.Q. is this wonderful soul 45 from 1964 on Newark, New Jersey's very own Carnival label. I've been trying unsuccessfully for ages to score a copy of the U.K. Sue label and finally gave in for this less pricey U.S. issue.

2. BILLY FURY- "Forbidden Fruit" (Live BBC)
This live BBC Oscar Brown Jr. cover from '66 swings thanks to the solid music backing, carried off in a jazzy/r&b style of Georgie Fame and The Blue Flames with horns and Hammond o'plenty (Fury's one time backing band in the early 60's). Found on his amazing CD "Live At The BBC" (which contains quite a few '65/'66 numbers that kick all his U.S. crooner style early 60's stuff in the dirt).

3. PERCY SLEDGE-"Oh How Happy"
Some ideas in the music industry make little sense.  Case in point Percy Sledge's U.K. only 1967 45 cover of The Shades of Blue's April 1966 U.S. hit "Oh How Happy". Why this was never released here I'll never know (U.K. Sue had already issued The Shades Of Blue version) but it's amazing and perfectly suited for Mr. Sledge!

4. MOON'S TRAIN-"My Town"
Moon's Train are sadly an odd footnote in Bill Wyman's extracurricular (musical that is) 60's career beyond The Stones.  They cut just one 45, a jazzy coupling ("Deed I Do"/"It's In My Mind") in 1967.  But their left over material issued as the excellent "The Life I Lead" CD shows them as a conflicted (but amazing) band torn between Georgie Fame-ish-mod-jazz/r&b and psychedelic pop.  "My Town" somehow bridges both with Mellotron rubbing up against horns that'd do a Geno Washington single proud with a great mod/freakbeat bash up ending. 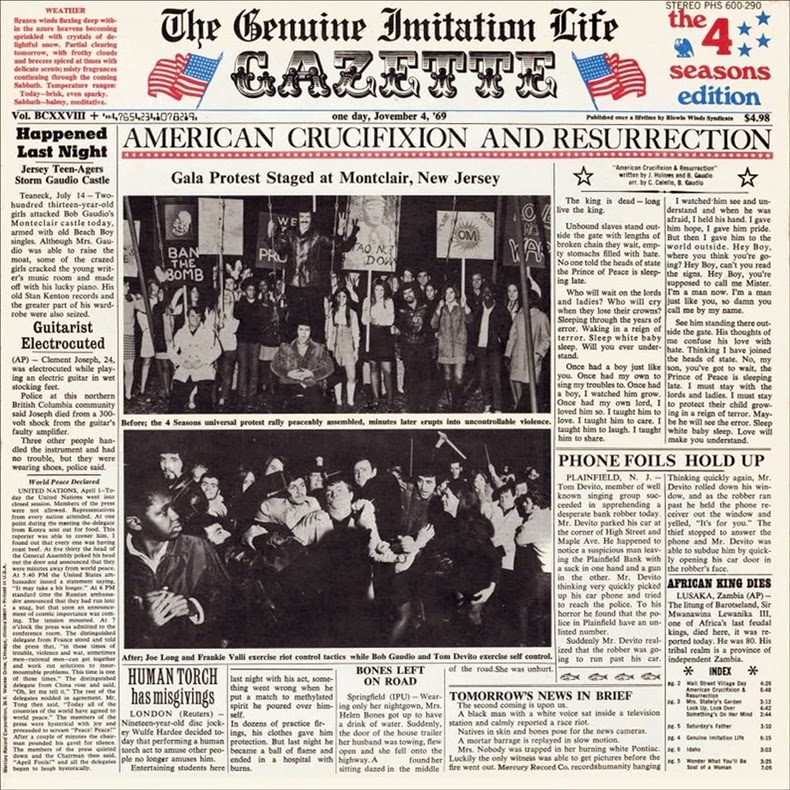 5. FRANKIE VALLI & THE FOUR SEASONS-"Mrs. Statley's Garden"
Found on The Four Seasons brilliant opus, the "flop" LP, 1969's "Genuine Imitation Life Gazette", this is a wild cross between sunshiny harmony pop with some minor pop-psych touches not unlike something on a 1967 Decca/Deram track (phased horns, strings, flutes/piccolos etc). The heavy social commentary in the lyrics are pretty interesting as well (though that statement could in itself describe the whole LP too).

6. SKIP SPENCE-"War And Peace"
Somewhere between '68 Pink Floyd and The West Coast Pop Art Experimental Band comes this spooky track that I discovered thanks to an episode of "True Crime" (where it perfectly fit) .  I'd long struggled to get my head around Skip's "Oar" album, and this was the perfect way in, trouble is there's nothing else on it that sounds like this!!

7. THE FOUR FOUR'S-"Go Go"
This New Zealand only 45 predates a re-recorded version by the band when they moved to the U.K. and renamed themselves The Human Instinct.  It's far murkier and raw and is amazingly infectious and was recently unearthed by the new 3 CD box set "Keep Lookin': Another 80 Mod, Freakbeat and Soul Nuggets".

8. THE PRISONERS-"Say Your Prayers (Cecil Road Demo)"
This 1982 demo of a track from The Prisoners debut LP "A Taste Of Pink" was tacked on as a bonus cut on the deluxe CD reissue of the album.  Recorded when the band was just a three piece lead singer Graham Day's voice has never been grittier and his over the top Dave Davie's '64 guitar solo is a treat.  Couldn't find the demo on YouTube so here's the studio version.

9. MONTY BABSON-"My Friend Jack"
This one is wiggy.  The Smoke's well known tune with vocals removed and replaced with a Hammond, much like all the Wynder K Frog/Island stuff and believe it or not it works REALLY well!  From the instrumental CD compilation "Roaring Blue: Return of the Instro Hipsters".

10. BILLY JOE ROYAL-"Cherry Hill Park"
Nicking it's horn riff from "25 Miles" by Edwin Starr this number had always intrigued me because not only is it powerful musically the lyrics are positively racy for the 60's Top Ten hit parade about a loose girl who puts it out to all comers after dark in the local park!!
By Wilthomer - July 28, 2014