United Artists belated interest in plugging the U.K. Hammond instrumental combo Wynder K. Frog was no doubt inspired by their modest success on these shores with the Spencer Davis Group when "I'm A Man" reached #10 in the charts (though once that ball was rolling Steve and Muff Winwood had jumped ship but that's another story).

"Green Door" was the U.S. debut single by Wynder K Frog (we discussed one of their U.K. releases here and it's U.S. version here) released in May 1967 three months after it's U.K. counterpart (issued on Island WIP 6006 it was their third U.K. 7" release).

"Green Door" is a Hammond and horns instrumental version of a 1956 U.S. hit for Jim Lowe (later covered by The Cramps on their LP "Psychedelic Jungle").  Full of funky Hammond chops c/o organist Mick Weaver, "Green Door" is carried by some strong horns and lots of shouts and clapping giving a sort of party atmosphere to the tune (much like the same feel they'd use on their next 45, a turbo charged version of "I'm A Man").

"Dancing Frog" is equally as frantic with some well punctuated "Uhh"s inserted in between some jazzy Hammond trills and with some more subtle horns.  Minus the organ it formed the backing track for a Jimmy Cliff number called "Let's Dance". Both tracks have a long history of being staples for mod/soul DJ nights for the past 30+ years. It was previously issued on the band's debut U.K. LP (not released in America)  "Sunshine Super Frog" .

"Green Door" was issued on Wynder K. Frog's debut U.S. LP "Out Of The Frying Pan" (United Artists UAS 6695 in 1968) and "Dancing Frog" appeared on the U.S. soundtrack LP for the cheezy Swinging London film "The Touchables" ( 20th Century Fox Records S-42006 1968) as well as their debut U.K. LP (reissued on CD) "Sunshine Super Frog" .  As far as modern reissues go "Green Door" is available on the Edsel CD reissue of the LP "Out Of the Frying Pan" and a Northern Soul compilation 4 CD set titled "A Complete Introduction To Northern Soul". "Dancing Frog" is available on a  reissue of "The Touchables" soundtrack (along with another Wynder K cut "Blues For A Frog") on iTunes in the US. 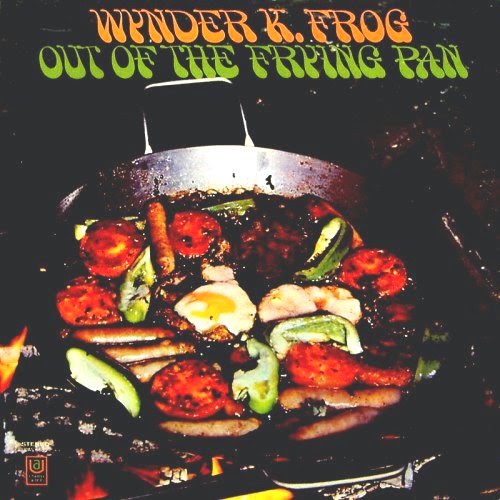