1. LISTEN-"Everybody's Gonna Say" U.K. CBS 202456/U.S. Columbia 4-43967 1966
Robert Plant's debut record was with this November 1966 45. This tune tucked on the bottom of a decent cover of The Rascal's "You Better Run" and is a pure raver. The first time I heard it to my ears it sounded like The Small Faces with a horn section and female backing vocalists. That was 1991 when I heard it (and it's A-side) on a bootleg CD called "Visions Of The Past Volume 3", I still stand by that impression. Sadly it's not been comped anywhere else that I'm aware of.


2. MIKE PATTO-"Love" U.K. Columbia DB 8091 1966
Recorded while Mike Patto was still fronting The Bo Street Runners (and prior to his joining Timebox) this 45 released in the final weeks of 1966 on the flipside of "Can't Help Talkin' About My Baby".  "Love" is an upbeat and almost poppy tune an aided by some incredibly cool Hammond via Tim Hinkley and of course Patto's soulful vocals.  It has cropped up on several compilation CD's which is in itself a testament to it's demand: "Rubble Volume 2: Pop Sike Dreams", "Take My Tip: 25 British Mod Artifacts From The EMI Vaults"  and Goldmine Soul Supply's "British Soul 2".


3. ROBERT PLANT-"Laughin', Cryin', Laughin'" U.K. CBS 202656 1967
I debated on including two Robert Plant tunes in this list but to atone for the horror that is and was Led Zeppelin you can't have enough good things in your back catalog and this one, the B-side to his November 1967 single "Our Song" is too good to leave off. Backed by some solid brass and carried by Percy's Steve Marriott styled vocalizing it's a non-stop stormer from start to finish (with some over the top no expenses spared production as well).  My fave bit is the middle part where some atmospheric organ comes in when the whole thing slows down and Plant croons "and every day's blue Monday since you've gone away...".  Why and how this has never been reissued is just plain fucking criminal.


4. TOMMY BURTON COMBO-"I'm Walkin'" U.K. Blue Beat BB 237 1964
The flip side of their lone Blue Beat 45  "Lavender Blue" (one of three white British bands to record on the label, the others were Mickey Finn and the Blue Men and Syko And The Caribs, whom are reputed to have been fronted by Christine Keeler's brother!) is this romp through the Fats Domino number with some gritty guitar, sax and mega raw vocals.  It's pretty lo-fi but in a charming sort of way sounding not unlike something Joe Meek might've cut in his bathroom or a bargain basement Graham Bond Organization at a date where they forgot the organ!  Another tune screaming for a reissue!

5. EDWICK RUMBOLD-"Come Back" U.K. CBS 202393 1966
Sadly relegated to Side B of the semi mediocre "Specially When" is this in demand ripping freakbeat meets mod/r&b tune.  Driven by some faint combo organ and in your face guitars pounding out a rocking rhythm for the soulful, impassioned vocals the track never lets up, dig the frenetic guitar solo!  Comped on the semi dodgy CD's "Echoes In The Wilderness" and "Portobello Explosion: The Mod Pop Sound Of Swinging London". 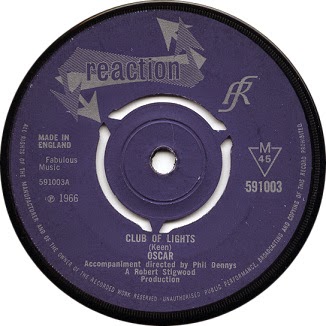 6. OSCAR-"Club Of Lights" U.K. Reaction 591003 1966
The follow up to Pete Townshend penned "Join My Gang" was the up tempo monster recorded by Oscar Beuselinck (aka Paul Nicholas) written by Townshend's protege Speedy Keen (who also wrote "Armenia City In The Sky" on "The Who Sell Out" and later of Thunderclap Newman). Kicked off by some fantastic fuzz guitar and a driving beat the number seems to me to epitomize the commercial/cash in London night spot discotheque a go-go sound.  As contrived as that scene/genre may be this one really moves, especially when the horns kick in. Reissued on the CD (and appropriately titled) "Portobello Explosion: The Mod Pop Sound Of Swinging London".

7. THE MIKE STUART SPAN-"Still Nights" U.K. Columbia DB 8066 1966
This Brighton band was, for a time, a Hammond and horns r&b act before shedding that image and going on to be the heavy and extremely collectible act they are better known as. This number was the flip of their cover of The Drifter's "Come On Over To Our Place" written by lead singer Stuart Hobday. Powered by some seriously powerful horns (the band featured a four piece and later two piece horn section) it's a perfect melding of soulful r&b with tinges of what would be coined "freakbeat" (much like a similar formula employed by the Quik, The Richard Kent Style etc). Sadly the band's guitarist on this track, Neil Langham fell to his death whilst on L.S.D. charting a firmly anti-drugs direction for the band. Comped in the 90's on a bootleg CD "Purple Pill Eaters" it has luckily been captured on the M.S.S. CD retrospective "Children Of Tomorrow".

8. THE UNIVERSALS-"Hey You" U.K. Page One POF 032 1967
A chunky, jaunty number that reminds me of an amphetamine version of the Move's "Wave Your Flag And Stop The Train" this B-side of the band's poppy/soul "I Can't Find You" this track is punctuated by some gritty feedbacking guitars, powerful horns reminiscent of The Richard Kent Style and a vocalist who sounds like a soulful John Sebastian! Reissued on the essential but dodgy "Echoes of the Past" CD/LP comp. 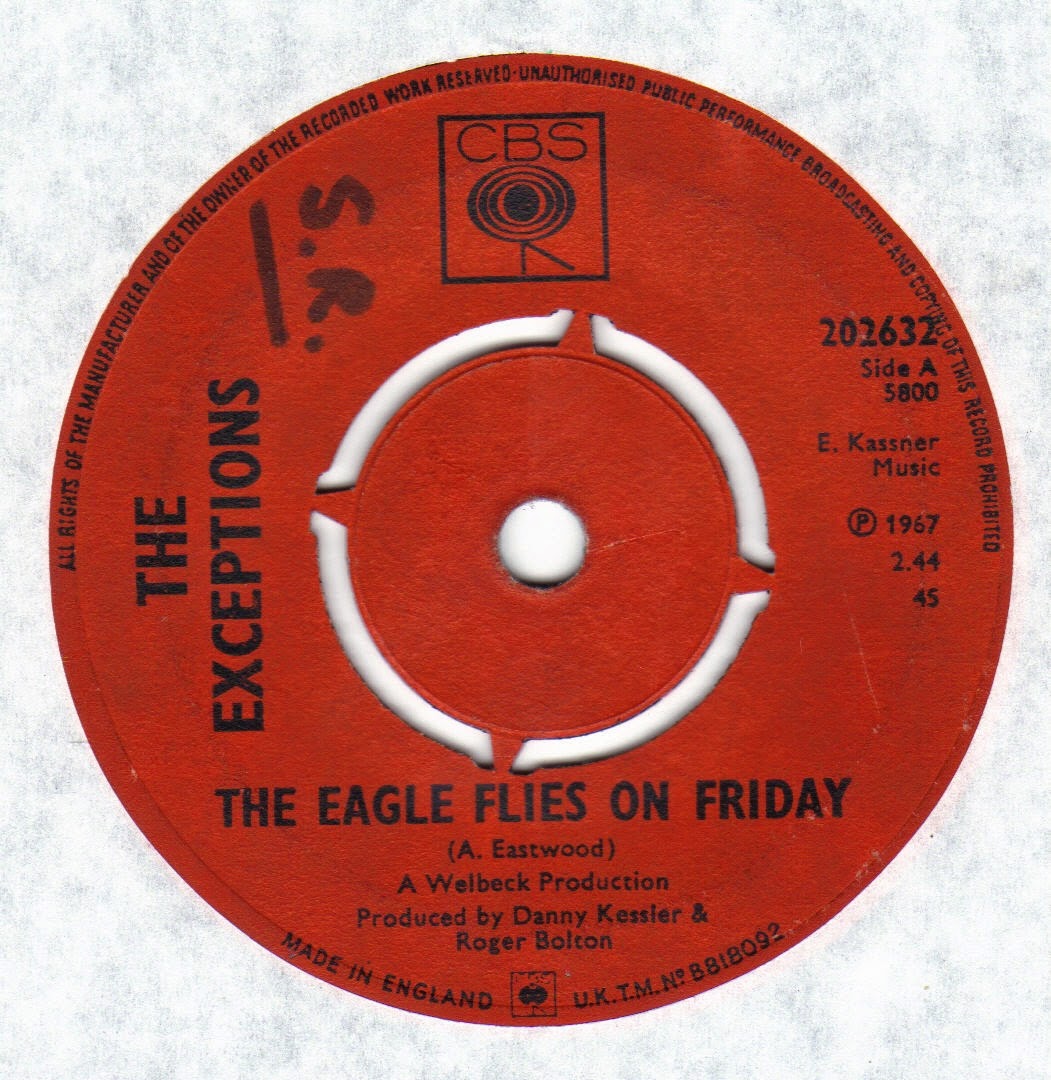 9. THE EXCEPTIONS-"The Eagle Flies On Friday" U.K.  CBS 202632 1967
The debut 45 by this U.K. trio is this hard driving number accented by some vibes, incredibly soulful vocals and a great but subtle fluid bass line. The vocals and vibes make it sound a bit like a Timebox track till the blistering freakbeat guitar solo comes on. Raw power! Comped on  the CD's "Chocolate Soup For Diabetics Volume Four" and "Rare Beat Tracks Volume 3".


10. THE ORGANISERS-"The Organiser" U.K. Pye 7N 17022 1966
Tucked away on the flip side of "Lonesome Road" is this jazzy Googie Rene meets Booker T style instrumental with some incredible Hammond work, bongos and a guitar solo that'd do Alvin Lee proud! Long among the holy grail of British mod/r&b records no one seems to know a thing about these fellas. It's been comped on CD's on the very first volume of Sequel's "Doin' the Mod Series" (Volume One, " The Go Go Train") and "Instro Hipsters A Go-Go 3".