1. APHRODITE'S CHILD-"The Four Horsemen"
R.I.P. Demis Rousous.  I was actually turned onto this one years back on a "Mojo" magazine freebie CD called "Heavy Mod" from their 1971 LP "666'.  I never got my head around the album as a whole but I still dig this one in it's witchy/creepy/heavy 70's way.

2. DEL SHANNON-"New Orleans (Mardi Gras)"
My friend Joe Oshman recently loaned me Del's 1968 LP "The Further Adventures Of Charles Westover" after hearing me rave incessantly about his previous LP "Home And Away".  This one is probably the heaviest thing old Del ever cut but it works in a variety of ways thanks to the orchestration, soulful Sweet Inspirations style backing vocals and menacing, funky vibe punctuated by some nice distorted guitar.

3. THE MOODY BLUES-"Jago And Jilly"
I have been completely over the moon with the new double CD of the the debut Moody Blues LP "The Magnificent Moodies".  Disc two is entirely alternate takes/mixes, live BBC tracks and best of all half a dozen songs recorded in late 1966 with Denny Cordell producing shortly prior to Denny Laine's departure.  "Jago And Jilly" is a jazzy yet jangly number that melds the band's '66 pop sensibility with an almost (and I dread to use this phrase) "folk rock feel" leaving their r&b/blues cover  in the dust and makes one wonder what they'd have had on their hands had Denny stuck around. 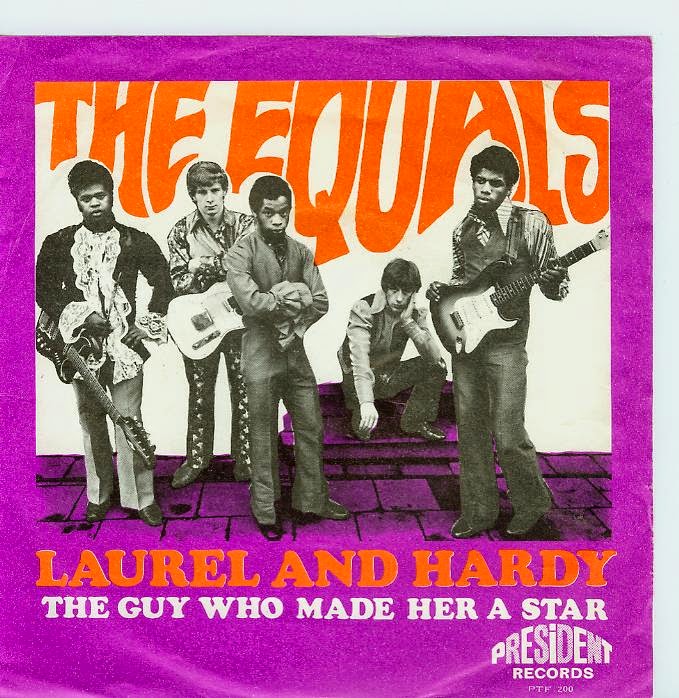 4. THE EQUALS-"The Guy Who Made Her A Star"
The first time I heard this track it was a cover version by The Purple Hearts on their 1980 "My Life's A Jigsaw" E.P. I eventually scored the Equals U.S. RCA LP "Baby Come Back" which is full of their best sides including this stormer which was first aired as the flip to the god awful "Laurel And Hardy". Easily one of their best in my book!

5. FREDDIE GORMAN-"Just For You"
Big props to my U.K. sister of soulful sounds Samantha Stevens for turning me onto this gritty little 1961 U.S. r&b grabber from Berry Gordy's early/short lived label Miracle. Easily mistaken for a mid tempo King records track this is where it's at for me these days as I can't get enough of this stuff.

6. TUESDAY'S CHILDREN-"Summer Leaves Me With A Sigh"
Fuck this is an amazing track!  From it's barrage of doom leaden fuzz guitar notes to it's Hollie-esque double tracked vocal to it's beat group getting a whiff of the winds of change feel this number is nothing short of incredible.  A 1966 Columbia (UK) 45, it was recently unearthed on RPM's "Keep Lookin'" box. 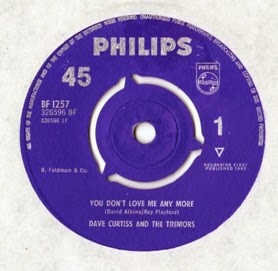 7. DAVE CURTISS AND THE TREMORS-"You Don't Love Me Anymore"
Hands down the FUNNIEST beat group record you will ever hear with some incredibly witty lyrics about a fella who's girl clearly does not love him anymore as she not only mistreats him but attempts, on multiple occasions, to kill him ("perhaps I got things wrong and acted like a clown and maybe you weren't driving that truck that ran me down but I don't see why a truck should come in through my front door all this leads me to believe that maybe baby you don't love me anymore") . It's backed up by some nifty volume pedal guitar work and is quite infectious.  From Phillips records (U.K.) 1963. Read more about this record in an earlier post here.

8. MAKIN' TIME-"You Crept Up From Behind"
I missed the train at the station on Makin' Time back in the day as I was too busy grooving on The Prisoners, The Times, The Direct Hits et al and viewed them with some suspicion as they were worshiped by all those silly "ankle bracelet on the bottom of skin tight trousers" mods.  What really made me wake up was their 2nd LP "No Lumps Fat Or Gristle Guaranteed" (from which this track originates) which to me sounded a lot more like The Prisoners than Makin' Time (while The Prisoners LP "In From The Cold" sounded more like Makin' Time than The Prisoners)!

9. THE TAGES-"Created By You"
From their amazing 1967 LP "Studio" ( partly recorded in the U.K. although most of the tracks were actually cut in Sweden) that falls somewhere between the first LP Bee Gees, The Beach Boys "Pet Sounds" and the prevailing psychedelic pop whimsy of ""Sgt. Pepper etc" but in a way that is in no manner derivative of any of those.


10. SPLIT ENZ-"I Got You"
Has it REALLY been 35 years since I saw this Kiwi band performing this number on ABC'TV's "Fridays"
(see clip above)?  Damn I'm old.  This number aged pretty well which is more than I can say for 90% of the other so called "new wave" music I ingested alongside punk/mod and ska!
By Wilthomer - January 28, 2015