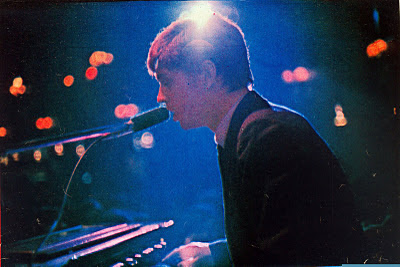 There are few box sets that have generated the level of excitement for me that Polydor/Unversal's new 5 CD box set "The Whole World's Shaking: Georgie Fame Complete Records 1963-1966".  All of Fame's material recorded for the Columbia label is included: his four LP's ("Rhythm & Blues At The Flamingo", "Fame At Last", "Sweet things" and "Sound Venture") plus all the singles (A's & B's) and E.P. tracks, a host of demos, live BBC session tunes, alternate versions and previously unreleased live songs and both sides of a German language 45. Completists will note that sadly owing to music rights issues it is not entirely complete as it's missing both singles the band cut in 1963 for the ska label R&B and records backing other artists at that same time (Ronnie Gordon's excellent "Shake Some Time" also on the R&B label and Perry Ford and the Sapphires "Baby Baby" on Decca from the previous year) .

Other than some ludicrously expensive Japanese remastered CD's most of this material has not seen the legitimate light of day on CD outside a German box set ("The In Crowd")  in the late 90's, the stalwart "20 Beat Classics" CD and the excellent BGP CD comp from a few years ago "Mod Classics 1964-1966". Here all of Fame's U.K. Columbia albums are faithfully reproduced in little CD album jackets and all of them sound incredible.  It still boggles the mind that some of these have not been reissued ever.  The long players offer a gamut of Fame's 60's Columbia career in a perfect encapsulation. Their legendary 1964 long playing debut  "Rhythm And Blues At The Flamingo" finds the band in their most interesting period readily mixing soul, jazz, blues, r&b and even ska.  By "Fame At Last" (released the same year) the emphasis seemed to shift more into jazz/r&b/soul. The third album, 1966's "Sweet Things" veers predominantly into soul territory and is my favorite period of 60's G.F. material (we wrote a bit about that period over here). Shortly after it's release The Blue Flames would be dissolved following the wishes of manager Rik Gunnell paving the way for Fame's jazz aspirations to come true with the follow up (also released in '66) "Sound Venture". An all out jazz affair (exception being a cover of "Papa's Got A Brand New Bag"), it was recorded with The Harry South Big Band featuring a virtual who's who of British jazz musicians.  The singles and E.P. cuts tacked on as bonus tracks on each LP disc are equally amazing.  Many, like the four cuts from his 1964 ska E.P. "Blue Beat" or my fave G.F. B-side "Telegram" have never been reissued before. 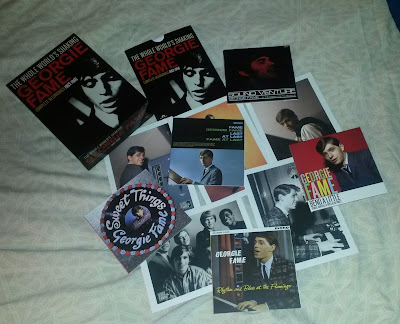 There are quite a few surprises even for G.F. anorak's like me. The bonus tracks on the "Rhythm & Blues At The Flamingo" disc contain three tracks from that LP's "live" session ("Parker's Mood", "Money" and "Molasses") the latter of which I had never heard before, the two others cropping up on a dodgy CD reissue on the bootleg label Rockin' Beat.  The disc also features the entire 6 song set from a 1964 BBC session they shared with The Rolling Stones  hosted by Long John Baldry and 4 tunes from the excellent oft circulated (ahem) "bootleg" from 1964 "Live at The Blue Moon, Putney". Why that entire gig was not added was not explained but I assume that was since a few of the tracks already appear in other forms here (and that some of those from the Putney gig bear some defects) we are left with just four:  "Sister Sadie", "Pig Foots", "Funky Mama" and "Signifying Monkey", all of which for anyone not familiar with the set easily surpass their live debut album.

Disc five "Bend A Little: Demos, Rarities & Outtakes" is where my head really exploded. There's 5 whopping demo cuts from an IBC session cut in 1964 that are mind blowing and were new to me.  I think they showcase Fame's organ playing better than anything else and two of the tracks ("Kidney Stew" and "Lonely Avenue") were never re-recorded anywhere else. There's a version of "Moanin'" that is incredibly faithful to the Lambert, Hendricks & Ross version and features an incredible organ solo by Fame and an equally stunning trumpet solo by Eddie "Tan Tan" Thorton and a sax solo (presumably by Peter Coe). Why this cut was never released at the time is a mystery . Presumably it was too "jazzy" for the band's 1964 long player "Fame At Last"? A rousing studio version of Louis Jordan's "Saturday Night Fish Fry" sees it's first release here with  Fame tackling it's catchy, fast delivered vocals and the band follow suit. A host of the other tracks ("Jelly Jelly Jelly", a cover of Earl Van Dyke's "Soul Stomp", the brilliant Tony Colton penned "Red Number Nine", Prince Buster's "Blackhead Chinaman", "This Is Always" and "Tan Tan's tune") all previously saw the light of day on the earlier mentioned German box set "The In Crowd" but gain their first wider release here.  One of my other favorites is the instrumental "Incense, which sees it's very first release here. In the liner notes Georgie Fame claims to have composed it though it's credited to "Fallon/Miller" (a vocal version was issued on U.K. Sue by The Anglos and Wynder K Frog cut a superior version on their debut album "Sunshine Super Frog").

In addition to the five discs there is a small hardbound book chronicling the whole story by journalist Chris Welch chock full of photos and loads input and quotes from the man himself on a host of the tracks contained within. There is also a small sleeve containing five 5 X 7 '64-'66 photos and an odd ball large size poster of Georgie in conversation with Mick Jagger.  I'm not really a poster guy in my old age but I think I would have rather had a blow up of a photo of Fame behind the Hammond at the Flamingo or a repro trade ad for an LP or 45 instead of a pic of the bored looking duo in conversation in what looks like a squat!  That said high marks to compiler Dean Rudland for putting together THE definitive Georgie Fame product of a lifetime.