One of the most interesting 60's British r&b 45's was by a guy who wasn't British.  Ben Carruthers (also known as Benny) was a small time American actor based in London who is best known for starring in a John Cassavetes film "Shadows" (1959) . Having managed to cross paths with Bob Dylan during Bob's 1965 U.K. tour via Albert Grossman (as immortalized in the D.A. Pennebaker film "Don't Look Back") Carruthers, according to Action/Mighty Baby member Ian Whiteman, asked the almighty Minnesotan for a song.  The response was a poem that had previously appeared on the back of Bob's "Another Side Of Bob Dylan" album which Whiteman states Bob hastily clacked out on a typewriter on the spot for Carruthers. With help from American born London based producer Shel Talmy a recording session was duly arranged for the Dylan poem now put to music by Carruthers who would be the lead vocalist.  A band was hastily assembled to back him mainly featuring a band of local architectural students called The Deep (Benny Kern-guitar, Ian Whiteman-keyboards, John ?-bass and Pete Hodgkinson-drums).  There is some conflict on exactly who played on the record as mention has been made of Jimmy Page and Nicky Hopkins involvement, which is entirely possible as both were Talmy's favorite hired guns.  Ian Whiteman states that he played a Lowery organ and that Nicky Hopkins played piano (there's no piano on the A-side however). Whiteman also asserts that the guitarist Benny Kern had equal involvement with Carruthers in crafting a song out of the poem despite his not being given song writing credits. In June 1965 the single hit the streets. Despite Great Britain being Dylan crazy at the time it did nothing and went on to become quite collectible. Three years later Fairport Convention would utilize a note for note arrangement of "Jack O Diamonds" on their untitled debut LP. 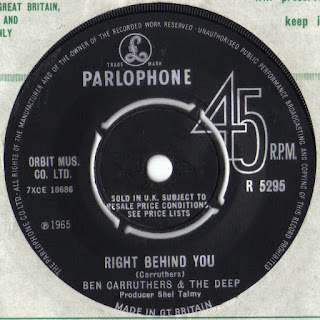 Fast forward to the spring of 1987 and yours truly is constantly snapping up British 60's LP compilations being prolifically issued by the See For Miles label.  Among them is a 1984 LP called "The R&B Scene" comprised entirely of mid 60's jazz and soul tinged British r&b. Among the gems from the Parlophone/Columbia catalog on this platter is this double sided monster by Ben Carruthers and The Deep. My mind is blown by the subtle, jazzy yet punchy sound of this 45.

"Jack O Diamonds" is a brilliant piece of music. It's coo and jazzy delivered in a hip vocal style with some tough guitars and a funky organ that evokes that mod London Mecca the Flamingo Club.  The jazzy swing and the key charges clash wonderfully with the brash playing making it full of amphetamine angst simmering below it's modern jazz exterior.

"Right Behind You", a Carruthers original that owes much to Mose Allison from it's swing and vocal delivery.  It's far more jazz than the topside with a nifty little guitar solo and some great bits where Carruthers sings along with the melody beneath a nice mix of descending bass line, piano tinkling and organ.

Ian Whiteman states that only one gig was attempted but that any further live gigs were scotched because Carruthers, despite being a "cool dude" could not sing.


Besides being issued on the earlier mentioned LP "Jack O Diamonds" graced one of the best British r&b CD compilations ever, Zonophone's 2007 "Take My Tip:25 British Mod Artefacts From The EMI Vaults".

Hear "Right Behind You":

Carruthers was also in the Dirty Dozen film