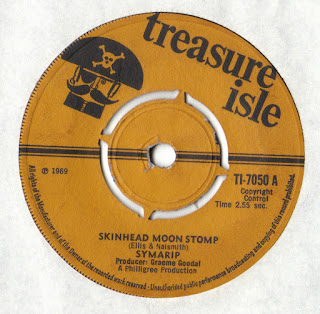 1. SYMARIP-"Skinhead Moonstomp"
"I want all you skinheads to get up on your feet, put your braces together and boots on your feet and gimme some of that old moonstomping".

2. THE GRAHAM BOND ORGANIZATION-"Early In The Morning"
We here at Anorak Thing are wetting ourselves with glee with word that in November there will be a 4 CD/50 song box set of 60's Graham Bond Organization BBC recordings (pre-order here). I've always been a huge G.B.O. fan and this bluesy duet between Graham and Jack Bruce backed by Ginger Baker's solid back beat and Dick Heckstall Smith's jazzy sax is nothing short of brilliant. One of the highlight's of their classic "Sound of '65" LP.

3. THE KELLY BROTHERS-"Love Time"
"I want you to meet me, down at 6th Street..." So begins the Kelly Brothers hard to find 1965 45 (Simms 247 1966) but incredible call and response mid tempo soul burner with some great licks. In my estimation it's one of their strongest.  Of course it's hard to find for under $50 because someone deemed it "Northern soul" way back and well you know that goes.

4.CHRISTOPHER COLT-"Virgin Sunrise"
"Turn down the road on a carpet of leaves, hands in pockets and breath like smoke, noise of the waking is living around me like a day in the past when the world awoke....."
No better song about an Autumn morning has ever been written than this one off obscure 1968 Decca single by one Christopher Colt, whom I know absolutely f*ck all about. 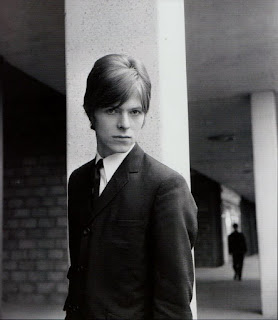 5. DAVID BOWIE-"Do Anything You Say"
Backed by some pounding ivories, off kilter guitar, faint organ and frat rock meets Motown backing vocals the newly minted David Bowie gives it his all on his second 45 under the new moniker for what would two of three releases under Tony Hatch on the Pye label .  Released on April Fool's Day 1966  $1,500-$2,000 will secure you an original copy these days, that is if it turns up. 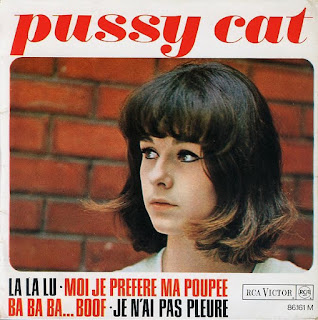 6. PUSSY CAT-"La La Lu"
Gallic girl wonder Pussy Cat (real name Evelyne Courtois) had a brief career in the mid 60's covering material by The Moody Blues, Hollies, Small Faces etc.  She also did an equal number of French compositions like this amazing little ditty from her 1966 E.P. that's eminently dance-able.  Recently RPM put out a decent CD compilation of her material "Boof!-The Complete Pussycat 1966-1969" which is pretty nifty if only for this and the before mentioned host of French language versions of British 60's cuts. Dig the French TV version recorded when I was a few days old below:

7. THE SMALL FACES-"Coming Home Baby (Live On The Joe Loss Show)"
Decca have just released a 5 CD Small Faces box set "The Decca Years 1965-1967".  I sat this one out as nearly all of the tracks were previously issued on the 2 CD deluxe editions of their two Decca LP's or the decades old BBC CD, that is save four tracks recorded live for the Joe Loss Show.  I'm glad I didn't make that eccentric leap as the quality is pretty sub par to the rest of their BBC tracks.  That said this smoking instrumental version of Mel Torme's "Coming Home Baby" highlights some nifty organ/guitar work which leads me to wonder did they come up with the arrangement themselves or nick it from somebody else as it certainly bears to resemblance to either the Kai Winding or Herbie Mann instro versions I'm familiar with.

8. THE REAL DON STEELE-"Tina Delgado Is Alive"
My old pal Larry Grogan of Funky 16 Corners/Iron Leg blog fame recently posted this out of sight instrumental from the late 1960's L.A. DJ Don Steele on his most recent Iron Leg podcast (download it here) that is out of this freaking world with some over the top fuzz guitar, funky Hollyweird session backing and Steele shouting "Tina Delgado is alive!" beneath a pulsing go-go organ grove.

9.  ERIC BURDON AND THE ANIMALS-"Anything"
From Eric Burdon & The Animals first "psychedelic" album, 1967's "Winds Of Change", this is a mellow but powerful piece of music as various instruments come in bit by bit and turn it into a an opus. The strings always get me and the delay effect on the drums is subtly trippy. 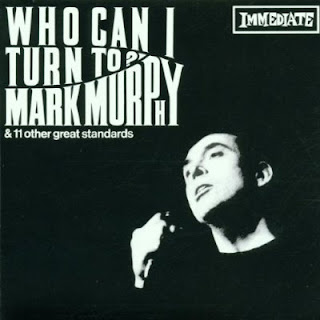 10. MARK MURPHY-"Who Can I Turn To (When Nobody Needs Me)"
Mark Murphy R.I.P. With an arrangement straight off of a late period Walker Brothers disc (or a Scott Walker solo one) comes the title track to Mark's rare as hell U.K. only Immediate album from 1966. Commercially a flop and at times a bit supper club jazz it's still an amazing record that was too "pop" for the jazzbos and too "jazz" for the pop world.
By William - October 27, 2015