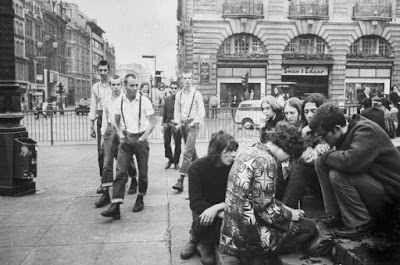 "Skinheads", no terms has ever struck fear and bewilderment into the hearts and minds of the public in Britain in the late 60's and early 70's.  Yet in 1969 skinheads were a viable commercial market commodity in the U.K., so much so that records were being cut in the U.K. and Jamaica to capitalize on the craze.  Some are viewed with derision by purists as being "exploitative" in nature (witness the horror, and understandably so, of Jonathan King's cash in "Johnny Reggae" by The Piglets see below). Anyway here are ten tracks issued during the skinhead craze in the U.K. in 1969-1971. Interestingly despite the view among some hardcore purists about these records most of them are extremely collectible and thus ultra expensive. 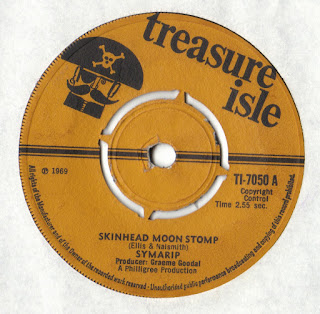 1. SYMARIP-"Skinhead Moonstomp" Treasure Isle TI 7050 1969
Symarip (who had previously recorded for Columbia Blue Beat as The Bees AND The Pyramids on President, among other monikers) took Derrick Morgan's "Moon Hop" and nicked the vocal intro from Sam & Dave's "I Thank You" to create the greatest skinhead cash-in of all time characterized by it's infectious/raucous "yay yay yay yah yah yeah yeah" chorus on top of a funky rocksteady groove while lead singer Roy Ellis ad libs. One of the first and best of the genre.

2. DESMOND RILEY-"Skinhead A Message To You" Downtown DT 450 1969
Starting with a pun on Prince Buster's "don't call me scarface" line from "Al Capone" ("don't call me skinhead, my name is John, John the Baptist"), ""Skinhead A Message To You" is a public service announcement aimed at decreasing aggro  ("wear your boots but don't kick nobody") above a fairly simple repetitive rocksteady riff that's reliant entirely on the cheeky delivery of the vocalist and a title paying tribute to Dandy's (Livingstone) legendary "Rudy A Message To You" from two years prior (Ska Beat JB 273) .

3. JOE THE BOSS-"Skinhead Revolt" Joe JRS 9 1970
"Skinhead Revolt" is a funky little rocksteady instrumental (not unlike the Mohawks) with a groovy trombone bit (Rico?) and organ behind a reggae groove occasionally punctuated by shouts of "skinhead revolt" from someone in the band. Released on the flip of "Tony B's Theme" on the short lived Joe label. I know f*ck all about this record! Another mega rare one!

4. PETER WYNGARDE-"The Hippie And the Skinhead" LP track "Peter Wyngarde" RCA SF 8087 1970
From actor Peter Wyngarde's bizarre and rare 1971 RCA album this track begins with Peter reading a letter to a newspaper from two skinheads girls clarifying their appearance and philosophy. It then degenerates into an odd ball country musical backing track with Wyngarde going on in full on camp thespian style about a skinhead who going "queer bashing" who meets a gay gentleman outside public gents whom he starts beating up to discover is actually a woman disguised as a man and they fall in love...WTF?!  It of course takes on an even more strange route when Wyngarde was arrested (decades before George Michael) in 1975 for "gross indecency" and "opportuning" in the public gents.

5. THE HOT ROD ALL STARS-"Skinhead Speaks His Mind" U.K. HR 104 1970
Another funky rocksteady/rude boy reggae instrumental with shouts punctuating it with a echo ladden vocal effect like that used on the famous "Double Barrel" by Dave & Ansil Collins (Techniques TE 901 August 1970) with the "vocalist" (I use that term loosely) occasionally crooning "skinhead" to the tune of "Amen". Another high dollar value 45.


6. THE CHARMERS-"Skinhead Train" Explosion EX 2045 1971
Starting out with a Syramip style intro "okay skinheads, get up and get set, grab you bag you kit and get fit" above a funky little groove with some sharp horns and hysterical ad-libs by the vocalist ("they say ride on, we're riding on to see Momma Popcorn.." and "this is the skinhead train. If you ain't a skinhead then get off somewhere and have a cough. You got to be a skinhead or else man it's like you're dead" this track is not without it's charm thanks to it's infectious groove which makes its completely danceable.

7. CLAUDETTE-"Skinheads A Bash Them" Grape GR-3020 1970
Heads up to my pal John Burns who hipped me to the fact that this number uses the extremely racist term "Paki" multiple times ("skinheads say Paki them can't reggae...") in this otherwise groovy (in a purely musical sense) little number that confuses me now that I listened to the lyrics more closely. I've known this song for the past twenty years and until Mr. Burns schooled me on the lyrics. Is it a call to cease and desist racist bashing or...? You take or opinions, please.  The musical backing is basically the same groove laid down by Laurel Aitken on his "Pussy Price" from the same year (Nu Beat NB 046). Which came first? So many questions.... 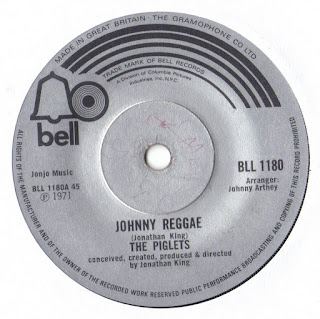 8. THE PIGLETS-"Johnny Reggae" Bell BLL 1180 1971
There is no better (or possibly worse depending on which way you look at it) example of skinhead exploitation than Jonathan King's "Johnny Reggae". With it's annoying tarty harpie "vocals" (King said it was session vocalist Barbara Kay) going on about Johnny Reggae above an awful cod reggae backing that's more Mud or Edison Lighthouse than The Hot Rod Allstars or The Maytals it's a classic example of exploitation at it's most contrived.  It rose to # in the U.K. in October 1971 no doubt sending shivers up the spines of every crop top in Britain.

9. THE HOT ROD ALLSTARS-"Skinheads Don't Fear" Torpedo TOR 5 1970
Another mega rare/in demand one, this jaunty early 70's rocksteady instrumental on the Torpedo label (home to all five of this band's singles, all of which will set you back an easy $100+ a piece if you can find them) is fairly pedestrian if it wasn't for some slightly off key Farfisa organ adding a bit of sweetener to the otherwise nondescript groove. The band (presumably an collection of studio musicians) also cut the curiously named "Skinhead Moondust" on the flip of their "Moonhop In London" 45 ( Torpedo TOR 10).

10. THE MOHAWKS-"Skin Head Shuffle" Pama PM 798 1970
As we have mentioned before elsewhere here I'm sure, The Mohawks were long touted by uninformed skinheads everywhere for ages as either a A.) band of skinheads or B.) a Jamaican band.  Now we all know they were a British music library session band grouped around K.P.M. main organist Alan Hawkshaw and that most of their skinhead associations came because their singles were released on the primarily reggae label Pama. They were mostly funky Hammond led soul instrumentals with infrequent forays into reggae, at first anyway.  Eventually they cut a few sides with a reggae-fied beat like this rare offering from 1970.

ADDENDUM:
Reader John South reached out to us and wrote:
"Just thought I'd point out that the group backing most of the Reggae singles you listed are a UK band named 'The Cimarons', 4 out of the 10 records listed are them, they are actually the 'Hot Rod All Stars' and to a lesser degree 'Joe's All Stars'(the Rudies also did some for the Joe label). The Cimarons backed Laurel Aitken on all his Pama Nu-beat sides."

I learned a lot from this post, thanks for pulling it together. I'll be happy not to hear the Peter Wyngarde tune again though!