For a better part of almost two decades I was under the mistaken idea that "Kensington High Street" by the Dead Sea Fruit was actually a Pete Townshend composition because I'd read it in the liner notes of a "Rubble" compilation LP. It would seem I was incorrect, as was my source (I never bothered to look at the spelling credits on this 45 which were "Townsend").

Regardless "Kensington High Street" is a brilliant little tune from a curiously named British quintet who released two singles and one LP on the curiously named Camp label in 1967. "Kensington.." is a very English '67 slice of pop that would not all all sound out of place among The Kinks material from that period or Cat Stevens '67 for that matter punctuated by some enthusiastic "hey" shouts at intervals and gratuitous amounts of "la la la's". With a simple backing of guitar, bass, drums and Farfisa and kicking off with a little guitar lick nicked from Bach's "Jesu Joy Of Man's Desiring" (later used by The Move in "Cherry Blossom Clinic Revisited") it's pretty darn infectious. 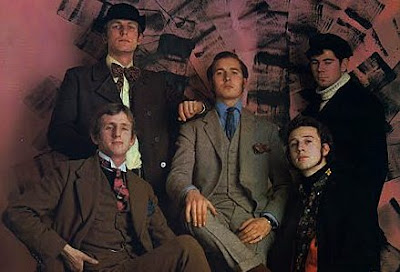 "Put Another Record On" suffers from too much of a New Vaudeville Band influence from it's dreadful muted trumpet intro and equally deplorable 1920's crooner style lead vocal (that eventually goes away for a bit rendering the track , briefly, like a throw away Lovin' Spoonful cut).

"Put Another Record On" was titled "Loulou (Put Another Record On") in France where the band were based as a covers act and I have read that it topped the charts there though I cannot confirm if that is 100% correct.  There are three clips of the band miming on French TV in ridiculous hippie/Roaring 20's garb (including both tracks from this single) which can be viewed below on good old YouTube. They later released a full (untitled) LP in the U.K. (Camp 603 001 1967) which is pretty rare.

"Kensington High Street" surfaced on Past and Present's "Piccadilly Sunshine Volume 3" while "Put Another Record On" has thankfully not.