All entries are U.K. releases unless otherwise noted.

1. THE DRAG SET-"Day And Night" Go AJ 11405 1967
Released on the short lived independent label Go most of you will know this number as it's later re-recording from when the band changed their name to The Open Mind and re-cut it for their untitled 1968 Phillips LP. The Drag Set version is far more enjoyable in my book as it still has the last vestiges of "beat music" to it and a raunchiness the re-recording lacks.

2. THE DAKOTAS-"Seven Pounds Of Potatoes" Page One POF 018 1967
Found on the flip of  the curious titled (and bland Cockney-country ballad) "I'm An 'Ard Workin' Barrow Boy" comes this blistering track cut not too long after The Dak's parted ways with Billy J. Kramer. At this juncture the band were down to Mick Green (guitar), Robin McDonald (bass) and Frank Farley (drums). Led by Mick Green's stellar string twisting and McDonald's understated vocals it's a powerhouse.  The band would cut one more 45, for the decade anyway.

3. THE IMAGE-"Come To The Party" Parlophone R 5281 1965
Written by the famous songwriting team of Stevens/Carter/Lewis , allegedly this 45 marks the record debut of one Dave Edmunds!  "Come To The Party" is a mid tempo, innocuous beat ballad with some sharp harmonies and an interesting interlude with a flute solo and some volume pedal work on the guitar throughout. 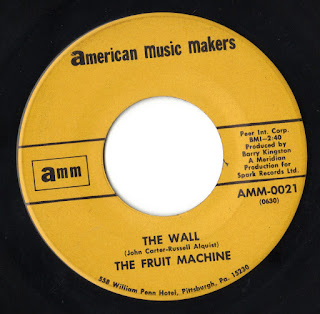 4. THE FRUIT MACHINE-"The Wall" US American Music Makers AMM-0021 1968
Yet another John Carter composition (with Russ Alquist). This is a US only 45 by The Fruit Machine with some great pop psych trappings: woodwinds, regal muted horns, phlanging, flashing cymbals and a dreary mood beneath a psychedelic wash with all the trappings and trimmings.

5. CAT'S PAJAMAS-"Camera Man" Direction 58-342 1968
Black British soul/r&b belter Kenny Bernard was known for fronting the r&b stormers The Wranglers  and a host of obscure soul infused 45's. With an entirely different twist this time around he fronted Cat's Pajamas who made two interesting 45's in '68 for Direction.  Starting with some heavy riffing guitars and chunky organ and some well punctuated shouts of "hey!", "Camera Man" is a rocking number that's just heavy enough to work without getting self indulgent. It was also penned by Bernard.

6. TOBY TWIRL-"Movin' In" Decca F 12867 1969
Toby Twirl cut just three singles for Decca, each one was different but they all were great. This was their last one, a magificent infusion of Decca/Deram blue eyed soul with some good old Deram/Decca pop-psych whimsy (horns, strings, blistering guitar bursts, etc). Produced by Wayne Bickerton with orchestration by Mike Vickers. Top shelf.


7. SHYSTER-"Tick Tock" Polydor 56202 1967
Yet another 45 cut by the Fleur De Ly's under yet another  temporary moniker. The lyrics remind me of "Daughter Of The Sun" (a number they'd back Sharon Tandy on) with it's witchy references and the musical backing is punchy with somewhat funky r&b edges with heavily Anglicized vocals.

8. THE ROULETTES-"Help Me To Help Myself" Fontana TF 876 1967
Starting with some trippy phlanged piano that predates "Odgen's Nut Gone Flake", "Help Me To Help Myself" was the final Roulettes 45. It's akin to late era Unit 4 + 2 (whom two of The Roulettes were playing with at this point) with some somber muted trumpets and a feeling of gloom despite the happy Zombies style harmonies during the easy/kitsch horn solo.

9. THE CHASERS-"Inspiration" Parlophone R 5451 1966
Somewhere between the '65-'66 Yardbirds and the snotty American "garage" music it inspired comes this monster U.K. beat number with a barrage of distorted guitar and tough up front vocals.  Infectious stuff written by Barry Mason and Les Reed and arranged by ex-Riot Squad singer Graham Bonney.

10. THE MONTANAS-"Roundabout" Pye 7N 17697 1969
Under layers of heavy and catchy guitar/bass licks and precise harmonies The Montanas dish out a very 1970's sounding ditty about a mean/loose girl who discards and ruins all she comes across. It's charm lies in the little breaks where it becomes minimal and then heavy at the blink of an eye.