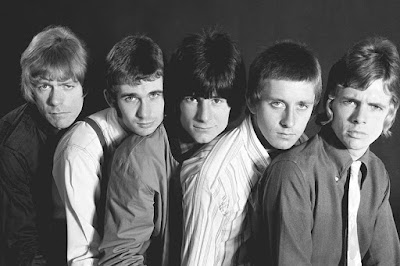 Birds fans everywhere rejoiced when it was announced that guitarist Ron Wood's journal which he kept in 1965 while a member of The Birds was to be published as "How Can It Be" (named after Wood's original composition which graced the B-side of the Bird's third 45 "No Good Without You Baby").  It soon transpired that it would be printed by Genesis Publications, best known for their $1,000 coffee table rock n roll publications and the rejoicing turned to disgust.

Eventually it was published in a more affordable and smaller hardcover 5.5" X 8" format (I snagged mine used on Amazon.com for $25) for us mere peons to have. To be honest had I known it was going to be an exact reproduction of Wood's journal I might have passed because reading reproductions of hand written entries in pencil and ball point pen becomes a bit tedious. It looks great as an exact reproduction as it is just that from it's light blue bordered pages to a 1965 atlas in the back to Wood's hand scribbled notes, details, addresses, phone numbers and some delightful sketches. Few of you, if any, will learn anything new about the Birds that you didn't already know if like me you'd read the "Ugly Things" piece on them twenty years ago. It's more who Ron had drinks with, what girls were at the party and tidbits about the Birds gigs. There are no revelations in Wood's entries, no juicy rock n roll tales or gossip or music nerd details aside from learning that the band never cut a B.B.C. session because they were "too loud", that nearly everyone in the band spent loads of money on clothes and that The Birds felt a great deal of camaraderie with The Who.  But when you think about it if you were an 18 year old guy in a band keeping a journal what would you write about?  The gigs you went to, the gigs you played, the girls you fancied and who you got pissed with.  Fair enough. There are some photos of The Birds contained, but not a lot and as mentioned earlier lots of drawings Wood did of the band, gigs and other bands (he seemed to go see The Who a lot at the Marquee). My favorite sketch is one of the neighbors gawking as The Birds and Artwoods vans are loaded/off loaded in front of the Wood residence (see below). Quite a spectacle I imagine considering that Ron's older brothers were both in bands, Art fronted the Artwoods and Ted played in the Temperance Seven. 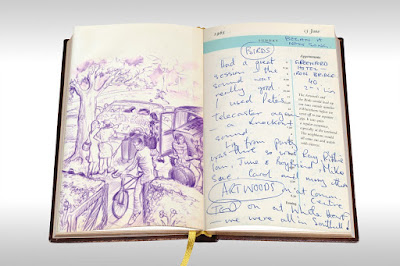 There are some previously unpublished pics from gigs, especially some tasty ones from the Uxbridge Blues and Folk festival (several in color, see the gig poster below) and some pages bear captions and sidebars that were typeset so they're easier to follow on the eyes than Ron's scribbled notes.

All in all if you're a Birds fan like me or a 60's British r&b aficionado and can manage this book on the cheaper side I say go for it, but don't spend a lot on it because it's not going to be something you'll read more than once. My advice for scoring a copy of the "new and used" section on Amazon or Alibris. 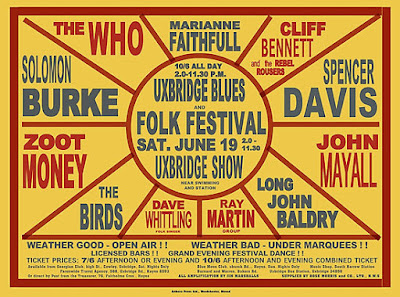