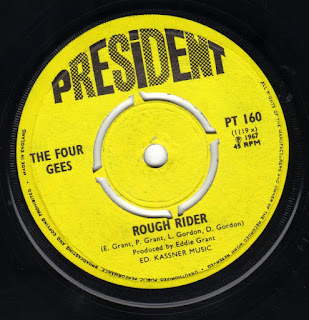 1. THE FOUR GEES-"Rough Rider"
After knowing this song for three decades (first through The "English" Beat than Prince Buster) I'd long assumed this was a Prince Buster composition. Not so, as I recently learned. It was composed by Equals Eddie Grant, Lincoln Gordon, Derv Gordon and Eddie's brother Patrick and recorded and released as "The Four Gees".  Derv and Eddie's vocals are clear as a bell here and though not as raw as the Prince's version there's still a great rhythm and since its pretty much a '67 Equals record what's NOT to love?

2. THE BONZO DOG DOO DAH BAND-"Mr. Apollo"
Probably the most rocking/heavy thing The Bonzo's ever did was this 1969 single that's somewhere between Status Quo and Locomotive's "Mr. Armageddon" but with the Bonzo's usual musical hall cheekiness and clever lyrics with some quirky hooks.

3. SERGE GAINSBOURG-"Psychastenie"
On the flip of his brilliant "Reqiuem Pour Un Con" comes this hypnotic raga instrumental driven by sitars, tablas, finger cymbals and nasty throbby bass. One of the few examples of Gallic psychedelia!

4. THE GAME THEORY-"Nine Lives To Rigel Five"
Back in 1984 when college radio was starting to get stale there were still a handful of bands and tracks I would enjoy hearing and along with The Three O'Clock was this little gem.  Though horribly dated by it's awful syndrums and crap 80's production it still has some quirky pop hooks and a cheery feel.

5. MAXINE NIGHTINGALE-"Don't Push Me Baby"
Long before her mega smash "Right Back Where We Started From" Britain's Maxine Nightingale gave us this M.O.R. meets soul 45 in 1969 on the Pye label with backing that sounds straight off a Dusty record or one of Tom Jone's more up tempo upmarket soul sides.

6. THE NEW ORDER-"You've Got Me High"
Props to Scandinavian record guru Jorgen Johansson who hipped me to the original 1965 version of this cut by Sweden's Science Poption a year later (as "You Got Me High"). With some tough/twangy guitars that sound like Beatles/British beat '65 and spot on Association style harmonies it slays the Science Poption version.  Interestingly the lead singer has an accent of some sort although I've read they were from New York!

7. SIMON DUPREE & THE BIG SOUND-"Get Off My Bach"
From their sole LP, "Without Reservations" which caught the band in full fledged super r&b mode with powerful horns and organ and soulful vocals, "Get Off My Bach" is somewhere between Manfred's '66 with horns and post Windwood /pre-pop psych S.D.G. 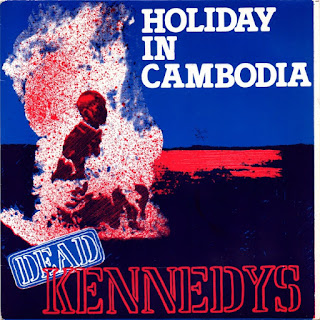 8. DEAD KENNEDY'S-"Holiday In Cambodia"
I was rarely down with any American punk records my friends were listening to in the early 80's coming up but one will always stick with me: "Holiday In Cambodia".  Maybe it's the ominous guitar licks that recall "Mars Bringer Of War", maybe it's Jello Biafra's shrieking vocals or his poignant lyrics about privileged American brats "listening to ethnicky jazz to parade your snazz on your five grand stereo..." but it sticks in your brain. 36 years later its lyrics still ring true in an age where the feel good fix is to sign online petitions to real world problems and dispense political wisdom from your armchair on social media.

9. LES McCANN & EDDIE HARRIS-"Compared To What"
Originally cut on the 1969 Atlantic LP "Swiss Movement" recorded live in Montreux this is angry black America at it's best put to music. Truncated down to 3:15 and released on 45 by Atlantic it's message is still, sadly yet to be realized 47 year later.

10. RODGE MARTIN-"Lovin' Machine"
30+ years ago back on the NY/NJ mod/60's scene a band called The Secret Service wowed us with this one that they'd learned via a live Easybeats version from German TV.  Several years back Larry Grogan over at Funky 16 Corners solved the mystery of it's origin. Cut in '66 on the small Bragg label as a B-side to "When She Touches Me Nothing Else Matters" this funky horn driven southern fried soul is a welcome gem in an all too mined out genre.