All entries are U.K. releases unless otherwise noted. All 45 scans courtesy of 45cat.com 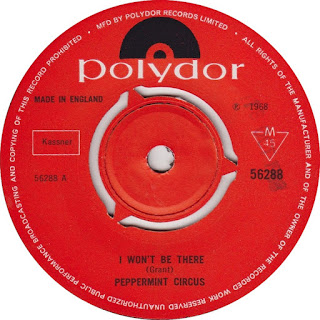 1. PEPPERMINT CIRCUS-"I Won't Be There" Polydor 56288 1968
Here's an interesting poppy take on The Equals storming "I Won't Be There". The ska type beat of the original is still there but the tempo is quickened and there's some tasty organ and some blistering guitar licks thrown in that keep it from becoming just another bland 1968 British pop record.

3. THE HINGE-"The Village Postman" RCA 1721 1968
I love this band name, it sounds like a powerful mod/freakbeat outfit, not so, but they're not bad either. "The Village Postman" is a cheeky/cheery mid tempo pop number with some social observation lyrics, extremely similar to the Keith West/Mark Wirtz opus "(Excerpts From) A Teenage Opera" only 100 times better with some '67-'68 Kinks style key changes (especially one at the bridge) and a jaunty little melody.  Brilliant. 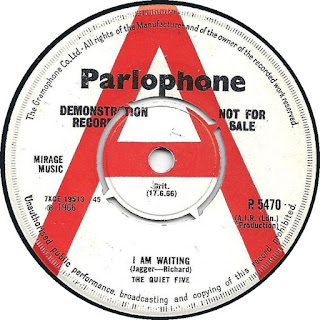 4. THE QUIET FIVE-"I Am Waiting" Parlophone R 5470 1966
I could easily do a post of covers from The Stone's "Aftermath" LP but sadly there are few as good as this simple yet sophisticated version of "I Am Waiting". As their name implies The Quiet Five were a mellow harmony oriented group but there's more than their choral perfection going on in this track. After the chorus there's subtle brass, organ and thundering drums that give the number the edge the original doesn't have and a melody that seems to nick "Do You Hear What I Hear". 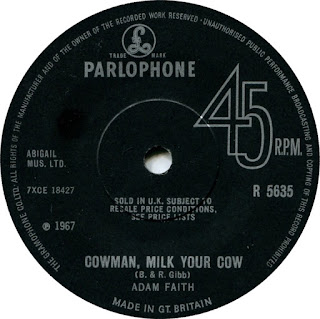 6. ADAM FAITH-"Cowman Milk Your Cow" Parlophone R 5635 1967
This unreleased Bee Gees track cut by Adam Faith in 1967 is nothing short of a British folk rock masterpiece.  With it's jangling guitars and raga riffs (care of The Roulettes!) to backing vocals by the Brothers Gibb it's a powerful number and certainly the best record Adam ever cut in my opinion. The lyrics are pretty "deep" and introspective and this certainly would not have been out of place on The Bee Gees first UK/US LP.

7. ROBB AND DEAN DOUGLAS-"Phone Me" Deram DM 132 1967
Issued on the flip side of Robb & Dean Doulglas debut, the tepid Righteous Brothers schlock of "I Can Make It With You", "Phone Me" is an uptempo but classically English mid 60's record in that it's got the dreadful caterwauling Breakaways style female backing vocals but luckily the kitschy organ and a feel not unlike some more uptempo Paul & Barry Ryan or Truth 45's keep it from being bin material. You can buy my US copy on Discogs.....no you can't it's gone.

8. THE PARKING LOT-"Carpet Man" Parlophone R 5779 1969
On the flip of the Rubble/Bam Caruso track favorite "World Spinning Sadly By" is the up tempo Jimmy Webb composition cut with the intended harmony pop intact. Produced with aplomb by former Yardbird Paul Samwell Smith it's an excellent example of the effect of American sunshine pop on Britain and is the bright day to the night of the flip.

9. THE MINISTRY OF SOUND-"White Collar Worker" Decca F 12449 1966
This one off 45 by the studio only "Ministry Of Sound" was the genius of Ivy League member John Carter and as expected is full of layers of precise West Coast styled harmonies (no doubt assisted by his band mates) that one would expect from something associated with him. It was done on the sly as John and The Ivy League were still under contract with Pye at the time of this release and rates as one of the more collectible sides from this genre. 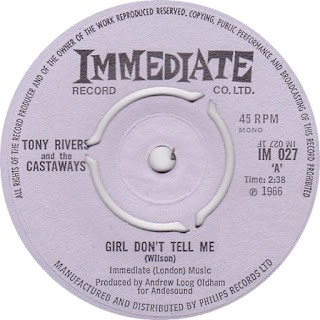 10. TONY RIVERS AND THE CASTAWAYS-"Girl Don't Tell Me" Immediate IM 027 1966
And speaking of West Coast.....Tony Rivers and the Castaways were Britain's best known surf/Beach Boys fanatics. At the time of the release of this tune in the UK (February 18, 1966) The Beach Boys version had been launched a mere week earlier which makes one wonder what Andrew Loog Oldham was thinking. Regardless it's a decent version thanks to the vocal strength of Tony and the boys (in fact it has more intricate harmonies than the original!) and the musical backing is pretty tough sounding. Interestingly it was backed by a cover of "Salt Lake City" on the underside. Dig the Four Season's "Walk Like A Man" chorus during the end.