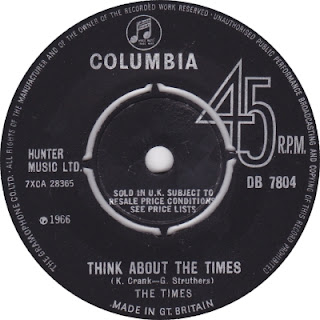 1. THE TIMES-"Think About The Times" Columbia DB 7804 1966
This slightly countrified beat/ballad has a swing to it that betrays it's 1966 date and sounds like something from two years prior.  The vocals and shaking tambourine add a chirpy feel to it that makes it very catchy.

2. THE NORTH STARS-"She's So Far Out She's In"  Fontana TF 726 1966
This obscure beat monster from 1966 has a punchy feel like a very early Kinks record and some storming drums and some Gretsch country licks (a regular formula for mid 60's British beat records) that keep your feet tapping the whole time.  It has a great title to boot. 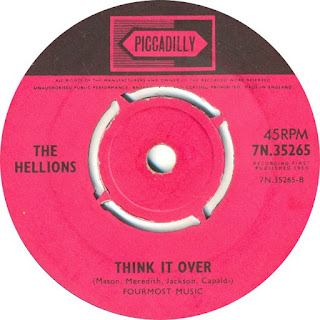 3. THE HELLIONS-"Think It Over" Piccadilly  7N35265 1965
Found on the flip of the third and final 45 ("A Little Lovin') by this pre-Traffic home of Jim Capaldi and Dave Mason , "Think It Over" has every ingredient for a mid 60's UK record: cool harmonies, a raw guitar solo, powerful bashing mod chords and a great melody.  The chorus reminds me of "Fly Me To The Moon".

4. THE SHADOWS-"Trying To Forget The One You Love" Columbia DB  8372 1968
Never one to go with the times or trends The Shadows trod the beat ballad path heavily in the year of super groups and 11 minute guitar jams with a tremolo/vibrato guitar laced punchy little number with precise double tracked harmonies, cracking drums and an excellent dirge like rhythm.

5. A FAIR SET-"Honey And Wine" Decca F 12168 1965
For those familiar with The Hollies excellent reading of this Goffin/King number you're in for a treat here.  The vocals have a strong male lead baritone with some killer male/female backing vocals that add a jazzy swing to it and the guitar work sounds almost identical to Tony Hick's licks on the Hollies version but then kicks into overdrive and surpasses it with some nifty flair. Powerful stuff. 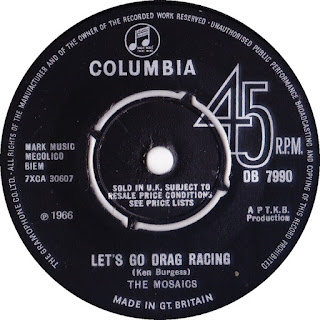 6. THE MOSAICS-"Let's Go Drag Racing" Columbia DB 7990 1966
We could do a whole entry of British mid 60's surf/drag racing numbers.  This title is one of the more obscure ones. Full of plenty of "oooo's" and Beach Boys style harmonies but what really makes this track work is the catchy beat group backing which reminds me of Mike Sheridan and The Nightriders (see below).

7. THE NEWS-"The Entertainer" Decca F 12356 1966
Here's an interesting cover of the Tony Clarke number that works because rather than try to do a carbon copy soul cover these guys turn it into a gutsy beat/ballad with minimal musical backing (bass, drums, guitar and a tasty little electric piano bit).

8. THE NIGHTRIDERS-"It's Only The Dog" Polydor 56116 1966
Rising from the ashes of Mike Sheridan's and the Nightriders last incarnation as Mike Sheridan's Lot these guys take a tongue and cheek number previously cut the The Kingsmen of "Louie Louie" fame (US Wand WND 1107 1965) and add some cocky Jagger style vocals, "Game Of Love" style licks and some female backing vocals (that bring to mind the Downliner's "Glendora"). The band eventually changed their name to The Idle Race and ditched r&b for twee toy town psych.

9. THE WILD ANGELS-"Please Don't Touch" B&C CB 114 1969
With the "rock n' roll" revival in Britain in '68-'69 I am left to assume that's where these guys were coming from.  It totally sounds completely out of place with the last year of the greatest decade and it doesn't deviate much from the Johnny Kidd original but it's still interesting not only in their choice of covers but the gusto in which they deliver it. 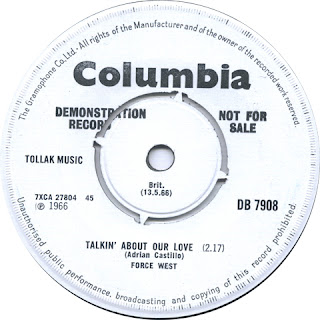 10. THE FORCE WEST-"Talkin' About Our Love" Columbia DB 7908 1966
Here's a 1966 beat tune that owes a lot to The Monkees (at least to my ears) and The Shadows on one of their mid 60's vocal sides . This is yet another classic example of how the British music industry had not remotely begun to recognize the "freakout factor" in 1966 and occasionally persevered  making great little records.