All entries are U.K. releases unless otherwise noted. 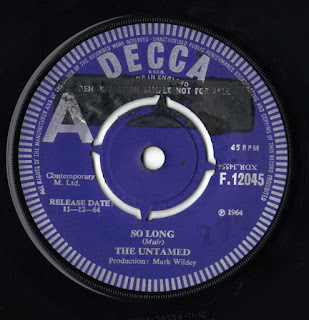 1. THE UNTAMED-"So Long" Decca F 12045 1964
The debut single by Lindsay Muir's much vaunted r&b group The Untamed was for some reason absent from RPM's excellent CD compilation of their work a number of years back (since it was not a Shel Talmy production I suspect that's why it was kept off that collection). "So Long" is a bluesy mid tempo number not unlike Georgie Fame covering Fats Domino . Interestingly it's a Muir original.

2. OSSIE LANE-"Come Back" R&B MRB 5006 1966
This track was also done by Edwick Rumbold on CBS (202393) in 1966 so I'm not sure which version came first.  This version was cut on the primarily ska label R&B (the label name came from it's owners Rita & Benny) and differs slightly from the Edwick Rumbold version by substituting the hard/slashing moddy guitars with an early Stax style horn lick reminiscent of "Do The Dog".

3. THE PREACHERS-"Too Old In The Head" Columbia DB 7680 1965
Written by Bill Wyman's old band mate from the Cliftons Tony Chapman and produced by Wyman himself this single is the vocal debut of a teenage Peter Frampton. It's a neat slice of jazzy r&b with some groovy sax and rollicking, bluesy piano and not at all unlike any other mid 60's British Flamingo Club r&b.  Dig Frampton's vocals that are a cross between Mose Allison and Bob Dylan.

4. TONY RITCHIE-"Comin' On Strong" US GNP Crescendo  GNP-406 1968
Strangely this was a US only release that I swear uses the same backing track as the Don Fardon version (which makes sense as both versions were produced by Miki Dallon). Though the vocals aren't as strong as Fardon's version I like this one because it's a bit more rocking as the fuzz guitar seems to be higher in the mix and Ritchie's vocals remind me of Billy Joe Royal.

5. MIKE STUART SPAN-"Come On Over To Our Place" Columbia DB 8066 1966
The first single by these legendary Brighton based freakbeat/psych monsters was miles apart from the heaviness of "Children Of Tomorrow" or "Remember The Times". Their debut was this soul-ed up cover of The Drifters "Come On Over To Our Place" full of organ and horns that leave the original version at the starting gate. There's a groovy little Farfisa solo and then a voice over that advises "Hey you chicks get on your wheels or walk it to Brighton to meet The Mike Stuart Span".

6. THE CLAYTON SQUARES-"Imagination" Decca F 12456 1966
Liverpool's Clayton Squares managed just two singles in the U.K. during their brief career (the band were also managed by the infamous Don Arden). "Imagination" was the flip of their final 45 "There She Is". It relies on a heavy, gritty horns infused groove that owes more than a little to  Willie Mitchell's "Everything Is Gonna Be Alright" and a wiggy sax solo.

8. THE ROGER JAMES FOUR-"Better Than Here" Columbia DB 7829 1966
Beneath some wah wah pedaled Farfisa (that has an almost early Pink Floyd feel to it) and frantic drumming this tough number provides an interesting marriage of beat, r&b and freakbeat (dig the wiggy guitar solo).  I know absolutely nothing about these guys so if anyone knows anything give us a shout.

9. THE UNIVERSALS-"Hey You" Page One POF 032 1967
The flip of "I Can't Find You" this Larry Page produced number bounces off at a pace /melody not unlike The Move's "Wave Your Flag And Stop The Train" swelled by some razor sharp horns that mesh perfectly with the frantic pace of it and vocals that remind me of John Sebastian.

10. DAVE ANTHONY'S MOODS-"New Directions" Parlophone R 5438 1966
Written by Manfred Mann and Mike Hugg (miscredited as "Mugg" on the label!!) this number offers a stinging "youth anthem"/social commentary not unlike their "Tired Of Trying, Bored With Lying, Scared Of Dying" or "Mister You're A Better Man Than I". Starting off with some jazzy horns and bluesy guitar it's a perfect vehicle for Anthony's detached/sombre vocals . The real power of the number comes from the tried and true mid 60's Brit mod/r&b "Hammond n' horns" formula which makes this number extra punchy.