The Sound of '66: The Association "Pandora's Golden Heebie Geebies"

The Association were catapulted to stardom in the US when their third 45 (their second for the Challenge label) "Along Comes Mary" burst onto the scene and climbed to #7 which was followed by "Cherish" six months later at #1 .  The follow up to"Cherish" sadly never rose very high, stalling out at #35, which to me is a zillion times better than "Cherish".  The track in question is "Pandora's Golden Heebie Geebies" penned by the bands lead singer/guitarist Gary Alexander. It was released in November 1966.

Seeped in a near eastern feel with what sounds like a koto and layers of precise harmonies that are at some points phased "Pandora's.." is easily the trippiest thing the band ever did. It became a stage favorite of our U.K. patron saints The Action who even did it in a B.B.C. session in 1967 (which unfortunately has yet to materialize). Like most of their material it's safe to say that the musical backing was the work of the Wrecking Crew, but it's the band who provide the stellar vocals that really make the track and of course kudos to producer Jerry Yester for putting it all together.

"Standing Still" is a tad boring, cut from the same cloth as "Cherish" it's more Four Preps than Fab Four.  The vocals are amazing but the song is just plain boring (though the baroque chamber music woodwinds during the guitar solo are pretty nifty). It was written by the band's drummer Ted Blueschel. 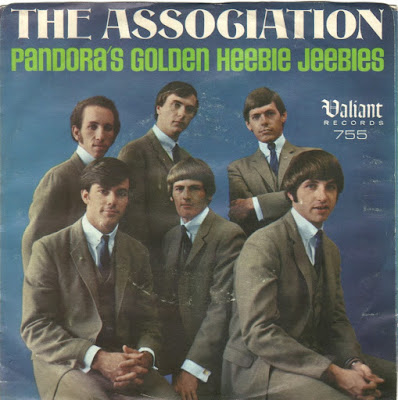 The track was included on the band's second LP "Renaissance" (their best in my opinion) along with it's follow up "No Fair At All" (January 1967), which like it's predecessor failed to rise very high (a dismal #51). The band then moved to Warner Brothers where their next three singles all received top ten placings.