In 1967 the British soul/r&b purveyors The Alan Bown Set followed the path of the Small Faces, Zoot Money, et al and ditched American black music for psychedelia and in the process dropped the "Set" from their moniker and left the Pye label for MGM. This was their debut as "The Alan Bown" and was released in England on MGM as MGM 1355 in October 1967. It was launched the following January in the US on the brand new MGM subsidiary Music Factory (becoming the label's second release).

"Toyland" is as the title suggests, a dose of what we in the know call "toy town psych". Starting with the same canned crowd noises that I swear Kaleidoscope used on "Holidaymaker" and some renaissance flute it features Jess Roden singing "let's go down and blow our minds in toyland, things aren't quite so square in toyland". At first it's unsettling to hear the man with one of the finest British blue eyed soul voices singing twee stuff like this, but he handles it very well. The strings come sawing in and the lyrics retain their sickly sweet references to children's characters and stories with double entendres about tripping out but something is missing. It's not an awful record it's just, well, utterly contrived? 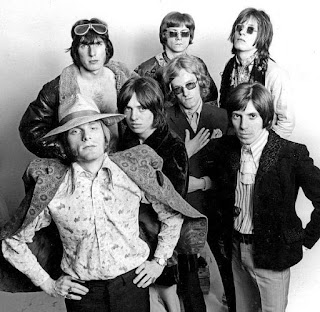 For me the gold has always been on the flip side. "Technicolour Dream" (with British spelling of "colour" intact on the US label) is a brilliant slice of orchestrated pop psych.  The layers of strings and subtle trumpets (courtesy of Phil Dennys) wave a trippy little backing while Jess Roden sings ruefully.  The best way I can sum it up is it's the closest Britain ever came to sounding like The Left Banke.

Both tracks were included on their "Outward Bound: The First Album" (released in the US as simply "The Alan Bown") and subsequent reissues of it.