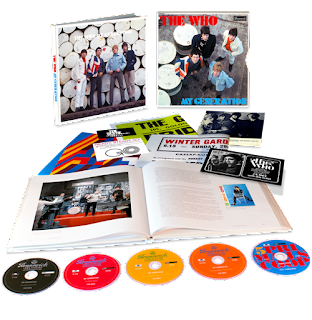 I'm 50.  I'm no longer impressed by deluxe editions that are packed with posters, reproduction handbills, business cards etc (not that I ever was...).  I just want the music and some good research backed liner notes. Polydor have sort of managed that with their new deluxe 5 CD box set of the legendary "My Generation " album (of course there's a host a crap jammed in that I haven't even bothered to look at as well that my kids will be puzzled by when they get rid of my stuff when they're either putting me in the ground or a home).

What I like most about this set is the 80 page book which intimately chronicles the making of the album. In addition to a wealth of information from all the principals it's full of b&w and color photos, some of which I have never seen before in my 36 years as a devotee of this album. It gives a detailed account of the history of the band and their music in the time leading up to and during the recording of the LP.  And there's track by track explanations of the different mixes and recording details on each one broken down by chapter for each CD. The disc of Pete Townshend demo's are annotated by the man himself song by song as well.  Now skeptics will point out that most of this stuff was already unearthed in 2002 with the deluxe edition 2 CD issue of the album containing Mono mixes. This is 100% true as so far as the mono mixes are concerned.  However there are loads of alternate mono and stereo mixes of these tracks that were not and that's what intrigued me.  I'm an anorak, I like hearing a new guitar bit I never heard before, a different vocal take or a different arrangement of a James Brown cover I've been listening to for three decades.  If you're like me you'll appreciate the two different Mono alternate mixes  of "Out In The Street" (one with a completely different guitar track, another with completely different vocals). There's an extended version of "I Don't Mind" with some interesting banter by the band before the track (that's otherwise no different than the longer 2002 version) . Ditto for the longer "The Good's Gone". There are also alternate mono mixes of "My Generation " (where Townsend's Rickenbacker and Entwistle's Danelectro leap out earbuds at you), "I'm A Man", "Daddy Rolling Stone", "Lubie (Come Back Home)", "Shout And Shimmy" and a powerful mix of one of my favorite '65 Who tracks,  "Circles".

It's with the stereo mixes that we approach murky waters. In the liner notes of the 80 page book it admits that during the remixing of the original stereo versions it was discovered that several instrumental and vocal overdubs were missing (as evidenced on the version of "My Generation" on the 2002 set that's missing the lead guitar track). Now here's were it gets dodgy... in 2014 Roger Daltrey and Pete Townshend entered the studio to recreate the missing parts.  It really doesn't matter that Pete used the exact same kind of Rickenbacker and the exact same kind of Marshall amp as he did in 1965 or that Roger added missing backing vocals.  In fact I listened to it BEFORE I read this and I didn't find anything amiss outside of hearing a few "different" things (namely slightly different backing vocal parts). I honestly would not have noticed had I not read this.  But the fact remains that I feel somehow, well, is betrayed the right word?  It just seems unethical to fuck with something like this.  Sacrilege is more like it....even if it does sound good.

My cynicism is further put to test on the demos CD. I am skeptical about some of the 11 Pete Townshend demos contained on their own disc because I felt there was something about them that sounded too modern, or more to the point, not from 1965 as it is indicated they all are. They have been remixed but there's something about the sound of the guitar on some that sound distinctly different from 1965, half of which are demos of tracks the band (or anyone else for that matter) never recorded. There are two versions of "My Generation" . "V3" will be immediately familiar to anyone who owned the 1982 Who book by Richard Barnes (with the disintegrating binding) as it was included on the flexi disc in that publication. "V2" is missing it's beginning but is by far the most interesting version, with multi layers of vocals, hand claps and reminds me of a surf/harmony group. "It's Not True", "The Good's Gone", "La-La-La Lies", "Much Too Much" and "Legal Matter" all bear a slight resemblance to the finished Who products but are interesting to hear in their infancy. My fave is "Much Too Much" with it's layers of harmony and punchy guitars and I'm sorry but the near pedal steel guitar on "Legal Matter" don't sound like something the angst pill popping Pete of 1965 would be doing (ending with the amusing "baby you wouldn't dig me underneath the covers anyhow"). The guitars on "The Girls I Could've Had" sound straight off of "The Who Sell Out" and "As Children We Grow" sounds utterly out of place with anything the '65 Who would truck with.  The demo for "Sunrise" sees Pete playing some jazzy acoustic guitar and utilizing vocal phrasings not at all unlike Antonio Carlos Jobim , in fact any moment I'm expecting him to sing "she's a Carioca..", and the lyrics are completely different from the later Who version. Oddly the version of "The Kids Are Alright" that cropped up on one of the "Scoop" compilations is conspicuously absent. "My Own Love" has guitars that sounds straight off "Rough Mix" and have a raga lilt to them that seriously makes me doubt the 1965 recording date.
By William - December 13, 2016