1. MARCIA STRASSMAN-"The Flower Shop" UNI 55023 1967
The late Marcia Strassman is best known to our American readers as Mrs. Kotter on the 70's sitcom "Welcome Back Kotter".  Unbeknownst to many she had a brief musical career in the 60's where she cut three singles for the UNI label. This somber pop psych ballad was found on the flip of the interestingly titled but musically bland "The Groovy World Of Jack And Jill".

2. MR. LUCKY & THE GAMBLERS-"Alice Designs" Panorama  52 1967
This Tandyn Almer composition was first issued in the U.K. in October 1966 by The Sugarbeats and later in 1967 this Pacific Northwest act (Seattle I've heard?).  They amp it up considerably and almost double the speed taking it from the mod/proto freakbeat feel of the Sugarbeats and turn it out as an uptempo , hard driving, harmony pop tune.

3. THE NEW ORDER-"You Got Me High" Warner Brothers 5816 1966
First brought to me attention via Sweden's Science Poption on Bam Caruso's "Rubble Volume 14: The Magic Rocking Horse", "You've Got Me High" was originally cut in the US by The New Order. Their original is a hard driving delivery that's the bastard child of folk rock, West Coast Association style harmonies and hard edged British beat.


4. THE TRAITS-"Nobody Loves The Hulk" Queen City QNA-101 1969
Sounding nothing like it's 1969 release date this cash-in on the mean, green Marvel comics anti-hero sounds like a mid tempo snotty 1966 U.S. garage teen record. I first heard it as a kid and little did I know until recently that it made it onto a "Pebbles" volume.


5. SOMEBODY'S CHYLDREN-"I'm Going Back To New York City" Uptown 727 1966
On the flip side of "Shadows" comes this killer track that falls somewhere between garage and British invasion rawness. The best part are the harmonies, which though not terribly tight, are still exciting.

6. THE RAVIN' BLUE-"Love" Monument 45-968 1966
No doubt inspired by The Who, this rocking cut by Nashville's The Ravin' Blue is a nice slice of Anglophile proto power pop that was even issued in Germany and Italy as well. It's pace reminds me of The Creation's "Biff Bang Pow" or The Who's "Doctor Doctor" with it's uptempo/frantic pace and punctuated shouts of "love!".

7.  THE GUILLOTEENS-"Hey You!" HBR  HBR 446 1965
Memphis, Tennessee's Guilloteen's cut this Kink's influenced monster in 1965 as the flip
side of their debut for Hanna Barberra Records.  Starting out with a great Kinks style 4 chord bashing it's a perfect track and an excellent encapsulate of the impact of tough edged British beat on American teens.

8. THE POOR-"She's Got The Time (Shes Got The Changes)" York 402 1967
Covered in the U.K. by The Affex, this mid tempo, harmony driven groover by California's The Poor featuring future Poco member Randy Meisner on lead vocals was written by Tom Shipley (later of Brewer & Shipley) is an innocuous piece of West Coast pop not unlike  The Merry Go Round. 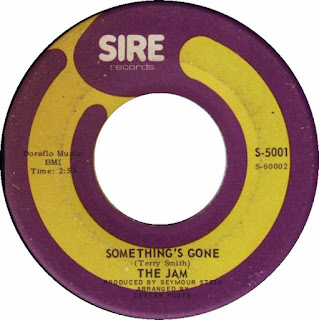 9. THE JAM-"Something's Gone" Sire S-5001 1968
Spokane, Washington's The Jam issued this solid track on Seymour Stein's budding Sire label in 1968 that was allegedly recorded a year prior to it's release. Beneath a driving beat and subtle organ trills the band layer it with Beach Boys style harmonies over a "My Girl" style progression.  Pure magic.