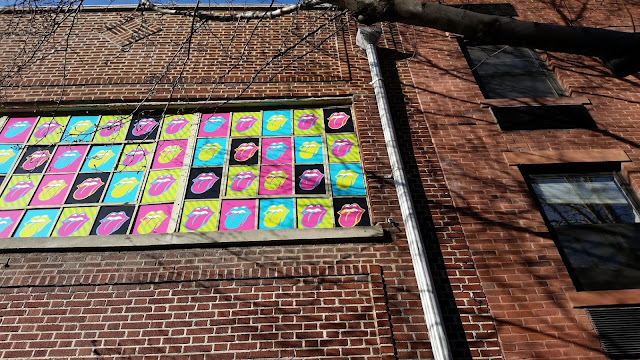 This past weekend Mrs. Anorak Thing and I caught the travelling Rolling Stones exhibit "Exhibitionism" in the Big Apple where it is running until March 12th where it then moves on to Chicago starting April 15th. Photography was not allowed (though that didn't seem to stop a quarter of the people there who did so unmolested, though with my luck any attempt would've seen me get chucked out).

For those not in the know Exhibitionism is a meticulously  curated collection of Rolling Stones ephemera from the band's private archive (which believe it or not resides in a warehouse in London). The band did not begin storing items until 1972 so items dating before that were loaned by collectors. Tucked away in a drab two story red brick building in NYC's West Village on Washington Street at a space called Industria, there's a host of memorabilia, hand written song lyrics, journals, posters, records, artwork, clothing, musical instruments, recording equipment, amplifiers, interactive mixing desks and a few interesting mock ups.


The most amusing mock up is a three room recreation of the infamous 102 Edith Grove apartment that Brian, Mick , Keith and James Phelge shared in London's Chelsea neighborhood. Legendary for it's squalor the bedroom (where Mick, Keith and Phelge kipped), the living room (Brian's nest) and the kitchen (such filth has never seen since the scullery in "Withnail & I") are all replicated right down to peeling yellow wallpaper, endless Player's dog ends, empty milk and Carlsberg bottles, half used Heinz tins, blues and r&b records and the requisite filthy linens.


I'm a massive fan of the band's 60's years, especially the mystique that was Brian Jones. Sadly there's not a lot of that but there are some select amazing pieces on display. Starting with instruments, Keith generously loaned at least two dozen of his guitars including his clear Dan Armstrong, his Harmony Meteor, his Epiphone Casino and his hand painted black Gibson Les Paul (in which he quipped "I think I must have been on acid. I was waiting to go to jail. There's not a lot to do when you're on trial") and a host of others. One has the feeling that the majority of Keith's guitars on display are his B-list axes as most his his favorites are understandably not on display.  Brian's gold top Gibson Les Paul as seen in "The Rolling Stones Rock N Roll Circus" is there as is well in a recreation of Olympic Studios during the recording of "Sympathy For The Devil" (complete with Charlie's African drum and his tabla's as heard on "Satanic Majesties.." and our fave The End's "Shades Of Orange"). There's Brian's old Harmony Jupiter guitar as used on their first recordings, Bill's first Framus Star bass (which replaced his homemade one), Brian's dulcimer (missing quite a few strings), Charlie's 1965 Ludwig kit, a Hammond used by Billy Preston and Ian Stewart's old upright. The final piece of the exhibit before the exit is Keith's cassette recorder and Charlie's antique fold up drum kit, as both used on "Street Fighting Man".


Then there's the clothing (or stage wear).  There's too much to document so I'll stick to my favorites: Brian's four button black John Stephen suit jacket with velvet collar (which looks so teeny, I'm 6"2 and a size 44 long in jacket, turns out Brian was 5"8), his black and white houndstooth check jacket with velvet collar from the band's one and only uniform (1963) loaned by Linda Lawrence (nee Leitch), Mick's eye catching three color wool 1966 jacket in green, orange and magenta, Mick's famous red grenadier guards jacket as worn on "Ready Steady Go" in 1966 and his Omega sign shirt from the infamous 1969 US tour (with red and black cape) among others.  The wardrobe gets pretty hideous from there especially in the 80's where it's like "Road Warrior" meets David Bowie's "Glass Spider Tour" cast off's. 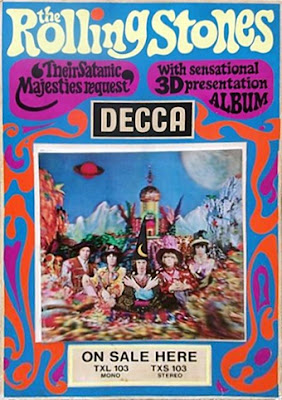 There's a host of promo posters (including a tasty one for "Their Satanic Majesties Request" album with a cool "freakout" font or Charlie in a leather jerkin for "Beggar's Banquet"), copies of all the band's UK LP's, proof sheets, loads of Warhol Polaroids and paintings from the 70's, stage models that resemble Nuremberg meets the Roman Empire and tons of songs lyrics, journals, contracts etc.

There's a short film in a mini theater about The Stones on celluloid narrated by Martin Scorsese (which oddly starts with Godard's "Plus One aka Sympathy For The Devil" with no mention of either Michael Whitehead's 1965 "Charlie Is My Darling" or the "TAMI Show" which were the band's cinematic debuts) and a mock up of the backstage area of a contemporary Stones show complete with Mick's dressing table and Keith and Woody's guitar cabinets stocked full of axes before your proceed to the final part, a 3-D  version of  "I Can't Get No Satisfaction" live from the band's finale at their July 2013 Hyde Park gig (also featuring Mick Taylor).

If you're a Rolling Stones fan and like me you're easily excited being in the same room as Keith's Epiphone Casino or a houndstooth jacket Brian Jones wore Exhibitionism is your bag. Tickets are $38 plus the usual gouging for "processing".
By William - March 02, 2017