Set up by Australian Robert Stigwood in the U.K. in 1966, Reaction was a short lived independent label (distributed by Polydor) with just 3 LP's, 18 singles and an E.P. in their brief 18 month existence. Nonetheless they were the home for Cream, The Who and a host of others.  Here's 10 interesting singles from their colorful discography for your perusal. 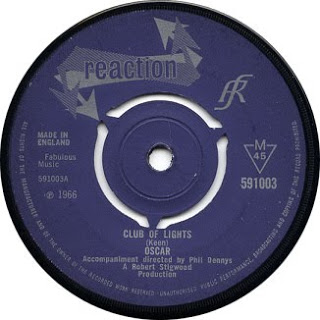 1. OSCAR-"Club Of Lights" 591003 June 1966
We profiled Oscar's releases on the label in several posts which can be viewed here, here and over here. "Club Of Lights" was his second of three 45's for the label and hands down his punchiest. Penned by future Thunderclap Newman member (and author of The Who's "Armenia City In The Sky") Speedy Keen, "Club Of Lights" is a raving '66 go-goer with a driving beat, horns, fuzz guitars and an amphetamine tempo.

2. LLOYD BANKS-"Look Out Girl" 591008 October 1966
This brass based harmony pop number was the flip of "We'll Meet Again". Falling somewhere between The Tremeloes '67 stuff and The Fortune's poppier side "Look Out Girl" is a decent slice of uptempo '66 pop (with a cool little organ solo in the middle) and a great false ending.

3. BIRDS BIRDS-"Daddy Daddy" 591005 September 1966
After three singles on Decca The Birds changed their moniker to Birds Birds and moved to Reaction for what would be their last 45. Bringing up the rear on the flip of a version of The McCoy's "Say Those Magic Words" is this menacing Ron Wood/Tony Munroe group original. "Daddy Daddy" is  pure unadulterated '66 mod/freakbeat at it's best with plenty of thundering drums, Vox fuzz box licks and detached confusion. 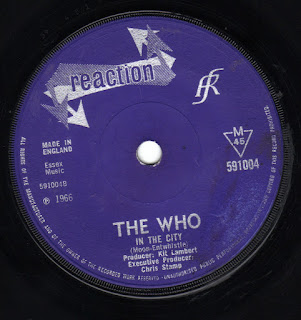 4. THE WHO-"In The City" 591004 August 1966
This Keith Moon/ John Entwhistle ditty was the flip to "I'm A Boy". It's an interesting mix with John's French horn, him and Roger's West Coast harmonies, jangly Rickenbacker and surf music lyrics no doubt care of resident Beach Boys fanatic Keith Moon.

5. WEST POINT SUPERNATURAL-"Time Will Tell" 59103 April 1967
The curiously named West Coast Supernatural's  sole Reaction single "Time Will Tell" is a poppy little ditty with crisp harmonies, a jaunty Kink's '67 feel and a cheery all round feel. I know absolutely nothing about them.  Anyone?

6. BILLY J. KRAMER & THE DAKOTAS-"Chinese Girl" 591014 April 1967
"Chinese Girl" covered the flip side of Billy's solo outing , an unreleased track by Stigwood's charge The Bee Gee's called "The Town Of Tuxley Toymaker Part One". Written by Dakota's Mick Green and Robin Macdonald, it would be Kramer's last work with the Dak's and no doubt his most powerful AND freakiest!

7. THE MAZE-"Telephone" 591009 November 1966
The Maze are best known to Deep Purple historian's as the band that contained singer Rod Evans and drummer Ian Paice. "Telephone", the flip of a version of Barbara Lewis "Hello Stranger", is a semi interesting piece of beat music melded with harmony pop.  At times it's rather tepid and mundane but interesting for historical value and Evan's deep tones.

8. SANDS-"Listen To The Sky" 591007 September 1967
Formerly The Others, Sands "Listen To The Sky" rounded off the unreleased Bee Gee's gem "Mrs Gillespie's Refrigerator" on the top side.  Starting out as a fairly innocuous pop track "Listen To The Sky" earns its spurs with cool harmonies, tough guitars and an ending mashing up guitars imitating an aerial dogfight with air raid sirens thrown in before ominously descending into Holst's "Mars, Bringer Of War".

9. MARIAN MONTGOMERY-"Monday Thru Sunday" 591018 October 1967
The final release by the label was this odd ball 45 release by M.O.R. personality Marian Montgomery. Sounding musically not unlike something Cilla Black would have cut at the same time, "Monday Thru Sunday" starts out with some uptown horns/flutes and is actually not a bad record thanks to it's high end production care of John Shakespeare and the previously mentioned musical accompaniment. 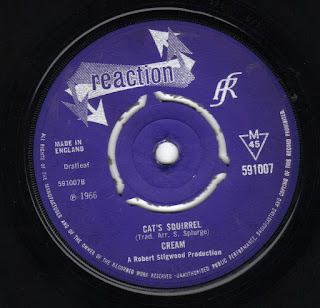 10. CREAM-"Cat's Squirrel" 591007 October 1967
The flip side of Cream's uncharacteristic vinyl debut "Wrapping Paper" was this raw blues instrumental driven by the powerhouse rhythm section of Jack Bruce (bass) and Ginger Baker (drums) and requisite Chicago blues guitar licks by Eric "God" Clapton.  The 45 version is in my estimation far superior to the different recording used on their debut LP "Fresh Cream".