Not to be confused with the diminutive American singer/songwriter this Paul Williams was (and still is) a 60's British r&b singer.  He started out singing with the Wes Minster Five before accepting an invitation to join Zoot Money's Big Roll Band on bass (despite not ever having played bass), where band leader Zoot Money had asked him to join based on his vocal skills so that the act could have a second vocalist in the line up.

Today's subject is both Williams first single with the Big Roll Band and the latter's first release on Columbia after just one single with Decca ("The Uncle Willie"/"Zoot's Suite" Decca F 11954 August 1964 credited to just "Zoot Money"). "Gin House" , originally cut in 1928 as "Me And My Gin" by Bessie Smith was something of a British 60's standard with versions cut by The Boston Crabs, The Animals and Amen Corner to name but a few.  The Paul Williams and the Big Roll Band version is the earliest U.K. version, no doubt it was brought to their attention by Nina Simone's reading. The Big Roll Band's version though not as upbeat as Simone's, is still delivered faster than the dirge like feel of subsequent U.K. covers.  Its an interesting version with Zoot's Hammond gently weaving in and out and the powerful horn section building the track bar by bar. 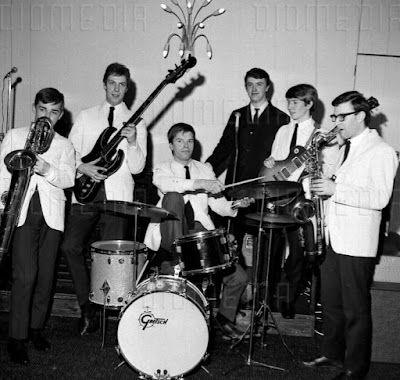 "Rockin' Chair" is an uptempo jumpin' jive affair with an almost ska meets jazz beat to it. Interestingly it musically resembles the jazz/r&b/ska style that William's previous act, The Wes Minster Five had nailed down.

Williams would receive top billing on another 45 with the Big Roll Band the following year as Columbia DB 7768 "The Msany Faces Of Love" b/w "Jump Back" in November.

"Gin House" is on the excellent EMI compilation CD "Take My Tip: 25 British Mod Artifacts From The EMI Vaults" and both sides are on Repertoire's comprehensive Zoot Money singles CD "A's & B's Scrapbook".