I've chosen to flip the 45 because I prefer the B-side "Something's Coming Along" to the top side "Tremblin". "Something's Coming Along" is a perfect pop smash full of sunshiney vocals, subtle brass, minor key piano hammering away and all the trappings of a cheery little innocuous ditty. It's technically a "solo" 45 by lead singer Ray Ennis as none of the band play on it.  Backing vocals are provided by the crack team behind many Dusty Springfield sessions: Lesley Duncan, Kiki Dee and Madeline Bell. 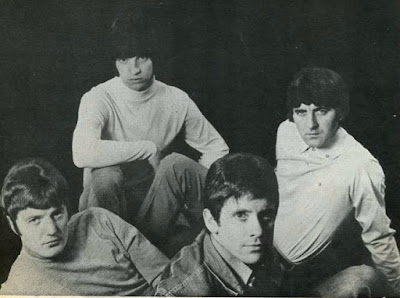 "Tremblin'", written by the American song writing team of Arthur Resnik, Joey Levine and Kris Resnik follows the same production technique of "Something's Coming Along" but the song itself is schlock garbage no matter how much fairy dust you sprinkle on it. It was previously cut by Gene Pitney, which explains why its an indistinguishable piece of trite pop trash.

Both sides have been compiled on sevderal Swinging Blue Jeans compilations, the best being the British "At Abbey Road" CD and the American "Hippt Hippy Shake: Definitive Collection".