This Swinging Blue Jeans January 1966 single was their very last U.K. chart placing , reaching #31 (His Masters Voice POP 1501). It was issued in the United States a month later but failed to chart.

"Don't Make Me Over", a Burt Bacharach/Hal David composition, was Dionne Warwick's first U.S. hit (#21 in 1962, it did not chart in the U.K.). The Blue Jeans interpretation utilizes a beat/ballad delivery with some subtle strings (orchestration by Harry Robinson). It's mildly appealing, but nothing that warrants repeated plays.

The real gem is the flip side, "What Can I Do Today".  Starting with some 12 string guitar playing a lick that's extremely reminiscent of The Animal's reading of "It's My Life", it's one of the band's strongest tracks with some great harmonies and a jangly "folk rock" feel to it. 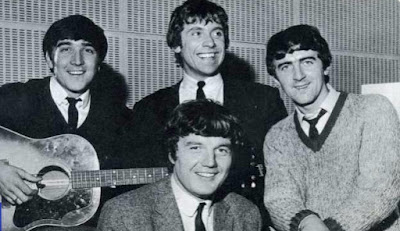 Incidentally guitarist Ralph Ellis left after the single's release and was replaced by ex-Escort and future Hollie Terry Sylvester.

Both sides have been compiled on several Swinging Blue Jeans compilations, the best being the British "At Abbey Road" CD and the American "Hippy Hippy Shake: Definitive Collection" disc.

Hear "What Can I Do Today":

Never bothered with Hippy Hippy Shake, but I really liked their covers of "You're No Good" and "Don't Make Me Over".