1. THE CAVEDOGS-"Tayter Country"
I missed Boston's Rickenbacker slinging power trio The Cavedogs when they blew through the area in 1990/1991 due to my participation in Operation Desert Shield/Storm but by all accounts they were pretty powerful.  This opening track from their sole LP "Joy Rides For Shut Ins" reminds me musically of the Jam but the detached sounding vocals are pure early 90's.

2. GENERATION X-"Ready Steady Go"
Billy Idol and Co.'s 1978 paen to the cutting edge 60's British TV series must have raised some eyebrows among the year zero punk rock cosignetti but it's a gas regardless of the topic from it's "My Generation" stutter ("I'm not in love with Tttttwiggy" ) to citing it's heroes (The Beatles, The Stones The Who etc) it's a far cry from The Clash's assertion of "no Elvis, Beatles or the Rolling Stones" in "1977".

3. GEORGE BENSON-"Ain't That Peculiar"
From his 1964 album "It's Uptown (aka "The Most Exciting New Jazz Guitarist On The Scene Today"), former Brother Jack McDuff sideman cuts an uptown, funky instrumental version of Marvin Gaye's "Ain't That Peculiar" aided in no small part by Lonnie Smith on organ and his own virtuoso guitar licks.

4. GOLDEN EARRINGS-"In My House"
One of my favorite tracks from their second album "Winter Harvest" is this merry little number that was also released as a single in their native Netherlands. It has some great pop hooks, soulful vocals and a wiggy little organ solo.

5. THE YARDBIRDS-"Respectable"
From their legendary debut album "Five Live Yardbirds" recorded live at the Marquee club in March 1964, the band turn the Isley's "Respectable" into an all out party that cheekily uses a ska rhythm to burst into Eric "Monty" Morris "Humpty Dumpty" mid rave. Listen for lead singer Keith Relf's nonsensical improv when he doesn't know the words for the same verse not once but twice.

6. DESMOND DEKKER-"This Woman"
This uptempo Island ska 45 from 1965 bears a slight resemblance to Alton Ellis "Dance Crasher" but with some call and response vocals thrown in and the pace quickened it's a still a killer! 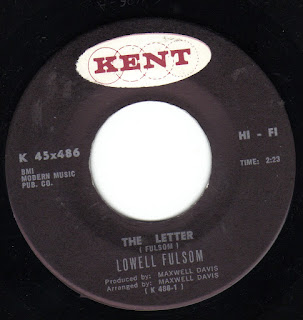 7.LOWELL FULSOM-"The Letter"
Though it dates from 1968 don't let the release date fool you, this uptempo blusey stormer about a lovesick G.I. away in Vietnam is a kick ass little burner worth checking out.

8. THE LARKS-"Mickey's East Coast Jerk"
Borrowing more than a little from The Ad-Lib's "Boy From New York City" and "High Heel Sneakers" this kick ass 45 on the small Money label is a solid piece of dance floor action and probably my favorite track by The Larks.  The flip "Soul Jerk", is equally cool.

9. THE UNLUV'D-"Ain't Gonna Do You No Harm"
For the past three decades I've wondered who the hell this band were and I'm still no closer to knowing anything about them.  It's a great soul track with some super horns and organ and a catchy guitar lick. 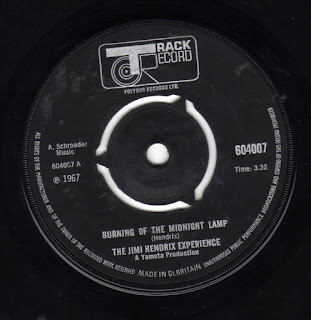 10. THE JIMI HENDRIX EXPERIENCE-"The Burning of The Midnight Lamp"
The fourth single by the J.H.E. took a slight detour from the usual "heavy" guitar sounds and was propelled by some murky wah-wah and a very baroque harpsichord that turn it into a sort of wonderful psychedelic dirge.

The Cavedogs were without doubt THE lost powerpop band of the late 80's/early '90's. I got to see them a few times, courtesy of timing visits to Boston right, and even got to travel with the band when they played CBGB's. (Poor guys had to deal with me mid-journey going down with the assertive female version of man-flu, which contributed to the entertainment - my response to an awful improv comedian getting a bigger laugh than his act, and me standing up to a junkie/crackhead trying to steal their drumkit as they packed up after the gig, and the guy backing down, freaked out by my sudden nosebleed.)

Wish I could have made their reunion gig.