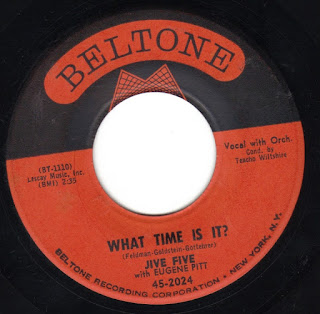 1. THE JIVE FIVE featuring Eugene Pitt-"What Time Is It"
One of my all time favorite doo-wop/vocal r&b tracks is this 1962 single by this Brooklyn quartet. It's an obscure single as it did not make the r&b charts and died at a miserable #67 in the pop charts but its harmonies are incredible and the lyrics perfectly encapsulate teenage nerves!

2. PAUL & BARRY RYAN-"Madrigal"
The final Ryan brothers single of the 60's was "Pictures OF Today". It's flip was "Madrigal", which brings to mind the toy town psych period Hollies mixed with all of the usual trappings of a late 60's British pop record.

3. KEITH MOON-"Do Me Good"
Recorded for the shit storm that was Moon the Loon's one and only LP "Two Sides Of Moon", "Do Me Good" is actually a good piece of mid 70's pop which doesn't explain why it was inexplicably left off the LP!! Below in the YouTube link is a bit shot for Tony Palmer's "All You Need Is Love" series of Keith still looking youthful and cheeky recording the track.

4. THE BEE GEES-"Deeply, Deeply Me"
A leftover from the sessions for their 1968 album "Horizontal" , "Deeply Deeply Me" is probably the most way out thing the Gibb Brothers ever did.  With it's muezzin like vocals, freaky guitars (that at moments sound rather like Robbie Krieger's licks on "The End") and general weirdness it's a bit over the top at times but still interesting when rubbing shoulders with "Massachusetts".

5. JON HENDRICKS-"Watermelon Man (Live)"
Jon Hendrick's vocal take on the Herbie Hancock penned instrumental from his 1965 album "Recorded In Person At The Trident" is probably my favorite version of the track due in no small part to his exuberance , have a listen and prove me wrong.

6. DAVID AXELROD-"Merlin's Prophecy"
I dropped the ball on paying tribute to the great David Axelrod, so this track from his monster 1968 long player "Song Of Innocence" will have to suffice. The excellent fusing of harpsichord and strings with jazzy drums might sound like confusion in my description but it's pure magic like the rest of the album. 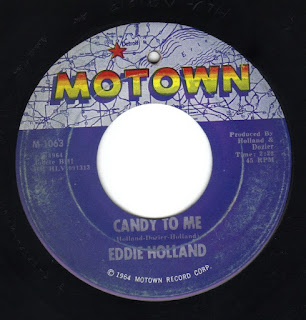 7. EDDIE HOLLAND-"Candy To Me"
Eddie Holland of course is known to all and sundry for his Motown records monster "Leaving Here" . "Candy To Me" was his tenth and final side for for the label and though not as powerful as "Leaving Here" it has a marvin Gaye-like quality in it's delivery that makes it worth seeking out.

9. THE KOOBAS-"Mr. Claire"
I'd long overlooked this track from Liverpool's Kooba's 1969 untitled long player until recently. I'd always brushed it off and only now just released how amazing it is with jazzy little flourishes interspersed with driving bass, swatches of Mellotron  and lead singer Stu Leathwood's almost campy vocals as he sings about an office romance separated by a Far East transfer.

10. PETE TOWNSHEND-"Stardom In Acton"
I'm not sure how but upon it's release I got Pete's 1982 LP "All The Best Cowboys Have Chinese Eyes" and really dug it, more so than any Who record around since the 60's.  "Stardom In Acton" is an angst fueled ditty full of witticism and cynicism delightfully wrapped up in 100 mph delivery and Townshend's sartorial eloquence.