The Bonzo Dog Band (or The Bonzo Dog Doo-Dah Band as our subject is titled) first came into my life via my local college radio station with "Intro To The Outro" (though it would be a good two or three decades before I knew it was them) and then eventually I witnessed them performing "Death Cab For Cutie" in the Fab's "Magical Mystery Tour" TV program.  But it wasn't until back in the age of MySpace that my friend Tom Davis had this cool Pathe color film of this quintessential English sounding track by a band miming it at the famous London night spot The Speakeasy on his profile page (see below!) and it was none other than "The Equestrian Statue" by The Bonzos! I was interested, very interested. Later that year I was gifted their first two albums for Xmas and my Bonzos journey had begun. 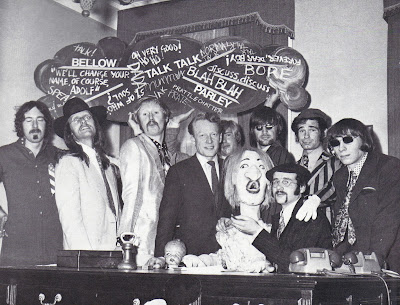 "The Equestrian Statue", written and sung by future Rutle Neil Innes, is a cheeky piece of whimsical English pop psych with it's harpsichord and brass band.  It's like a collision between the Edwardian whimsy of the '67 Kinks or a track of off the first Bowie album. The lyrics, like most Bonzo's tracks, are witty and satirical.

"Intro To The Outro" is a hysterical piece narrated by the band's lead singer Vivian Stanshall where he introduces first the band members and the instrument they play (where then said instruments join in) . He then proceeds for the rest of the song with a hysterical list of celebrities on other instruments as the instruments themselves add to the cacophony : "Adolph Hitler looking very relaxed on vibes", "over there Eric Clapton, ukulele", "Kenneth Park sax, great honor sir.." and "digging General Charles DeGuaulle on accordion, rather wild sir!"etc.

Hear "Intro To The Outro":